FIRST Lady Grace Mugabe was back to her shrill and acerbic best on Friday. 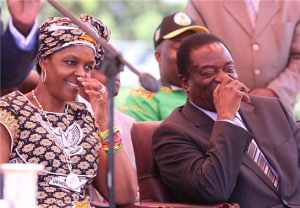 “I’m not Mugabe’s prostitute. How about you? Can you count your prostitutes?

â€œStop talking when you know there’s only filth behind you,â€ said Grace, wife to the countryâ€™s 92-year-old leader.

She added: â€œI’m abused; they say I’m undignified and ill-mannered.

â€œWhat about you and your 1,000 wives? If you see a men bedding multiple women, they donâ€™t have respect for women.â€

Grace was addressing a rally at Kanyemba Secondary School in Chiweshe, Mashonaland West.

The gathering was billed as a meet-the-people rally but allies of the beleaguered Vice President (VP) Emmerson Mnangagwa would likely describe it as an â€˜attack the Crocâ€™ campaign; the VP is also called the â€˜Crocodileâ€™.

Grace did not name Mnangagwa but promised that would soon come.

She appeared to be following the same strategy she used when she launched a campaign that culminated in the ouster of former vice president Joice Mujuru in 2014 for allegedly plotting President Robert Mugabeâ€™s ouster.

On Friday Mnangagwa was similarly accused of coveting residency at State House. But Grace said her clothes would remain in the wardrobes there.

â€œWhich post are you dreaming of occupying? Whose seat? Didnâ€™t you hear thereâ€™s no vacancy at State House?

â€œWeâ€™re still there, my clothes, my things and my children are there,â€ she said.

Mnangagwa reportedly leads a Zanu PF faction keen to see Mugabe retire to allow a new leadership to take over while Grace is the figurehead of the so-called G40 group said to be determined to ensure the VP does not succeed the veteran leader.

Two army officers and activists from a fringe political party were recently arrested and charged with trying to bomb a dairy company owned by Grace.

At her Chiweshe rally, the First Lady blamed to foiled attack on Mnangagwa and his group.

â€œIf your plan is to bomb our dairy to induce fear, hoping weâ€™ll surrender power, then you must be mad, very mad.â€

Grace claimed the attack would have killed thousands of vulnerable orphans she looks after at her Mazowe complex.

â€œArenâ€™t you ashamed? Killing other peopleâ€™s children when youâ€™ve yours, all 20,000 of them? Mugabe only has the three.

â€œSpare us these pretences of loving the President, I can read through your lies and I know youâ€™re lying,â€ she said.

The First Lady further claimed that there had also been a plot to murder one of her children.

She said: â€œImagine it has got to a stage where they want to kill my son, Bellarmine. Is it fair to expect me to smile at you?â€