A variety of churches, under the leadership of the Zimbabwe Council of churches (ZCC) are playing an active role by raising public awareness of waste management and that they are doing this through music. 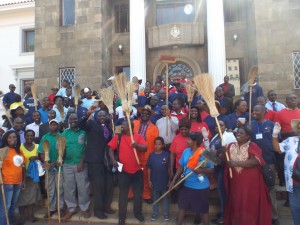 Zimbabwe’s church community is playing an active role in waste management awareness at a time when the city of Harare and nation at large faces challenges in cleanliness standards.

According to Sarah Mwandiambira, Economic Justice Programme Officer of the ZCC, they have been working with Green Ambassador, Derrick Mpofu to co-ordinate church choirs in order to raise public awareness on the subject of waste and refuse management.

Mwandiambira told this reporter that 24 churches have so far come together to do an environmentally musical album and video titled ‘And the church goes green’. The event will be launched on Saturday 16th of April at Harare Gardens.

â€œIf any reader of this article thinks that their church might like to participate, the door remains open to increase the number of choirs and the studio recording is free of charge,â€ said Mwandiambira.

Guests of honour for the launch event will include the Minister of Environment, Water and Climate, OppahÂ  Muchinguri-Kashiri and the Mayor of Harare, His Worship Councillor Benard Manyenyeni.

It is also reported that prior to the event, participants will tackle a massive clean up operation of the Harare Central Business District.Â  All churches will be participating as well as the Chief Executive Officers, Church leaders and the guests of honour.

â€œWe would like to thank all friends and groups in the music industry for their support and for volunteering to be part of this social responsibility incentive,â€ she said.