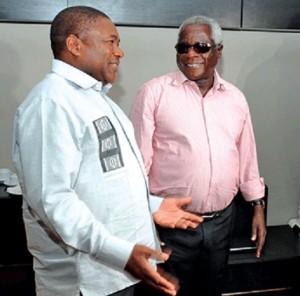 Monsignor JosÃ© Luis Serrano, secretary of the Apostolic Nunciature (Vatican embassy in Maputo), told NotÃ­cias that these names had been put forward in response to President Filipe Nyusiâ€™s invitation to the Catholic Church for it to join the group of international facilitators in the political dialogue aimed at restoring peace.

The Holy Seeâ€™s appointments complete the list of mediators sought from international organisations by the government and Renamo.

Powell will shortly be joined by former president of Tanzania, Jakaya Kikweti, who will have to interrupt his stay to attend a Chama Cha Mapinduzi party-political congress but will be represented in his absence by a senior official from his office.

The group proposed by the Mozambican government will join that suggested by Renamo which includes, besides the representatives of the Catholic church, Mario Raffaelli and Father Angelo Romano from the Community of Santâ€™Egidio, representing the European Union, and an ambassador representing South African president Jacob Zuma.

The Joint Commission tasked with preparing a meeting between President Nyusi and Renamo leader Afonso Dhlakama will announce the terms of reference of the group of international mediators soon.

From then on, the mediators will take an active part in the work of the Joint Committee, which has already agreed the agenda points for the Nyusi-Dhlakama summit. These are: the government by Renamo of the six provinces where it claims to have won the general elections of 2014; the Defence and Security Forces; and the disarmament of the main opposition party and the integration of its armed men into the Defence and Security Forces.