Phai Munaingo, left who lives with his family of four children in a one room makeshift home in Epworth, near Harare, Friday, Oct.31, 2008. Roads, water, and power services are collapsing as Zimbabwe battles with the worlds highest inflation currently estimated at over 231 million percent . According to an Amnesty International report released Friday, President Robert Mugabes government is deliberately protecting those who have committed human rights violations in order to maintain its hold on power and this has allowed human rights abuses to escalate. (AP Photo/Tsvangirayi Mukwazhi) 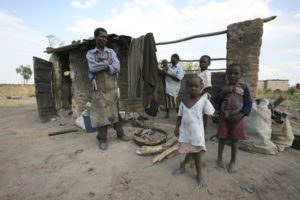