We speak once again to Sharon Pincott, who spent 13 years with the Presidential Elephants of Zimbabwe, following the latest cyanide attacks in Hwange that claimed the lives of at least 10 elephants. 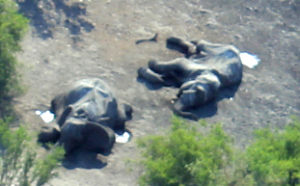 Sharon, how does it feel with this latest cyanide poisoning all being so close to home, and yet so far away from where you are currently based?

Pincott:  It’s heart-breaking to know that cyanide poisoning continues to go on in Hwange. And this time – despite those few operators in Hwange who have in the past chosen to sprout ‘fake news’ about how unaffected the Presidential Elephants have been amid all that continues to go on there – I’m reliably informed that at least 4 of the elephants dead are actually this time right in key Presidential Elephant areas, which border Hwange National Park Main Camp. It’s certainly important in this regard to not let Zimbabwe go backwards 20 years – that is, reliant on knowledge of elephants in this area that in some cases is more than 20 years old! – so that (taking into account today’s intimate expertise) the realities on the ground are properly understood with regard to these elephants. In the early 2000s as well, as all of us involved in anti-poaching at that time will remember, we were instructed by a government minister to never speak publicly about any snaring or other poaching. Times have, thankfully, changed at least in this regard. Of course you can’t fix problems if you try to sugar-coat everything, and refuse to acknowledge the very real problems that do exist.

Were some Presidential Elephants poisoned this time?

Pincott:  From my current base in Australia, I can’t know. As I’ve said before, elephants walk in and out of these outside areas, to and from Hwange National Park, all of the time. As with the recent Theunis Botha elephant hunting accident, the probability is high, though, that Presidential Elephants were involved in this one area. I’m also yet to find out if those affected were adult males, or females and offspring. It’s certainly now at a stage where I wonder, every day, which of the Presidential Elephants that I knew so well, and monitored so closely, are now gone for good – or soon may be.

What would you be doing now if you were in Hwange?

Pincott: From the approximate age, sex and ear of the carcass visible, I’d be trying to identify who exactly has been killed. If that proved unsuccessful especially given the state of the carcasses (bodies decompose rapidly when cyanide is used), I’d be once again surveying the 17 extended Presidential family groups to see who is now missing. Unfortunately when people don’t know these elephants intimately nor, therefore, can identify who is missing from a family group, these undertakings are no longer possible.

Also, similar to what I arranged with the Environment Ministry back in 2013, who immediately ensured that dollars were available to pay for the required fuel, I’d be trying hard to get an aircraft in the air, with as many eyes as possible on-board as ‘spotters’, to fly in proper pre-plotted, tight transects, over as large an area as possible over the course of days and weeks and months, scanning for further carcasses. Hwange has such large bushy areas, and all carcasses are never going to be found, as I know only too well, even from the air. But it’s certainly a worthy task.

We now also hear a lot of talk about drones being used in Zimbabwe. Assuming these aren’t being used to just find elephants (and rhinos and other wildlife) to kill, I would hope these would be up in the air doing a similar job, with reliable personnel properly analysing all of the recordings.

Are there known poachers in this area of Hwange?

Pincott: Absolutely. And many of these very well-connected poaching criminals are no doubt still walking the streets, having court dates for previous poaching offences continually set aside. Somebody provides that cyanide, somebody else uses it, and more than one person helps to get the ivory from the dead elephants out, and through the crazy number of police roadblocks that Zimbabwe is renowned for, and then out of the country.

There’s certainly been gun poaching of elephants in this same area previously. And in past years there’s also been a lot of snare poaching as well, with wire traps frequently found suspiciously close to some photographic safari lodges too. Those on the ball know to never fully trust anybody, no matter the position they hold. Even some National Parks staff, as we all know well by now too, may be involved. It’s easy enough to try to deflect, and make these dreadful deeds look amateurish and organised by others.

The bottom line is that Hwange elephants typically have relatively small tusks, especially compared to many of those in East Africa. The sad reality is that a huge percentage of Hwange elephants with more substantial tusks, and also the genes to pass on larger tusks, have been shot out years ago now. Larger and out-of-country poaching syndicates are less likely to target Hwange elephants, at least for now, given that they have to do a lot more work to get the same amount of ivory. Hwange authorities need to get their own poachers, from right under their noses, behind bars. And just as importantly, keep them there. I’m pleased to her that National Parks personnel are apparently treating these latest incidents very seriously. I just hope that, as has been the case previously, none of these people in trusted positions are involved. I know well that some dubious characters are still around Hwange, just as I know too that there are, thankfully, very honest and reliable people doing their jobs well.

Do you see yourself back one day, to try to determine what has really happened to the Presidential Elephants since 2014, when you felt you had little choice but to leave Zimbabwe?

Pincott: That’s a difficult question to answer, for various reasons. Chiefly though, private land grabs in these key Presidential Elephant areas have not been properly sorted out as far as I know, and it would seem that there is still little government commitment to give the Presidential Decree any truly-real meaning and weight at all. Having said that, it’s always easier, long-term, to come to terms with a reality, rather than to continually wonder what may have happened to those you care so much about. And so, perhaps one day, if I can manage to do a survey, and if ever there’s positive change.

Just briefly, to your book Elephant Dawn. How are things going?

Pincott:  I’m now very pleased to have had the opportunity to write that book, without restraint. It’s reaching far and wide, and with the UK release just this month, interest within Europe has increased as well. In fact I did an interview with Talk Radio Europe just last night. Emails from readers keep flowing in, particularly touched by the story, with all sorts of different emotions running high. It’s helping more and more people to care more passionately about elephants, and to keep focus on Zimbabwe. For those who care, that can only be a good thing for the elephants.