Harare - Two independent Zimbabwe journalists have refused to be turned into state witnesses after they reported on a press conference in which a disgruntled ex-ruling party official called on President Robert Mugabe to step down. 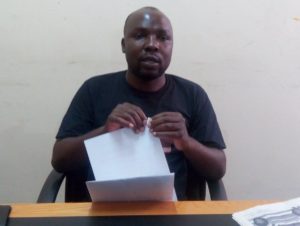 Godfrey Tsenengamu, an ex-Zanu-PF provincial youth chairperson, reportedly told a press conference in February that First Lady Grace Mugabe was “unpresidential” and that Vice President Emmerson Mnangagwa should be helped to succeed Mugabe.

The private NewsDay carried a story on the comments under the headline: “Mnangagwa ally savages Grace”.

Tsenengamu was arrested a day later. He is now facing charges of subverting the government or undermining Mugabe’s authority.

The Zimbabwe Lawyers for Human Rights says police detectives summoned NewsDay editor, Wisdom Mudzungairi and reporter Everson Mushava on Tuesday and asked the reporter to produce “a witness statement to bolster the State case against Tsenengamu”, the group said.

According to ZLHR the journalists declined citing “journalistic privilege and the constitutionally protected freedom of expression and freedom of the media, which protects the confidentiality of journalists’ sources of information”.

Rights groups immediately condemned the police for making the request.

“Such actions have an intimidatory effect on the media practitioner, who should normally feel protected by the Constitution to carry out the work without these visits by law enforcement institutions,” NewsDay quoted a ZimRights statement as saying.