Cape Town - Blessing Lunga makes shoes in his two-roomed shack. He learned how to make them from a man he stayed with in Johannesburg. 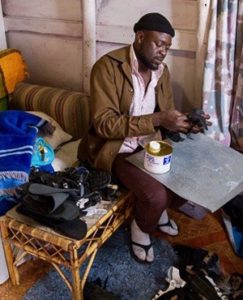 Originally from Zimbabwe, Blessing has been in South Africa for ten years. The eldest of three, his younger brothers – Bruce, 26 and Brighton, 25 – followed him to South Africa after a few years, and he has taught them to make shoes, GroundUp reports.

Together, the brothers sell their wares in Masiphumelele, Capricorn and Samora – R100 a pair for children and R200 for adults. They make shoes for men and women.

We followed Blessing on one of the days he went to sell in Masiphumelele. He carried the shoes on his shoulders, going door to door, introducing himself.

Many people looked and some ordered; only a few people showed no interest. Blessing said he felt safest in this area.

The brothers live in Redhill, a small community on the mountain slopes overlooking Simon’s Town.

“It was not easy starting in a new place, but we needed to make money, especially since two of my brothers were married and starting their families,” said Blessing.

Blessing lives alone. His two brothers stay with their families not far from one another. Their two sisters, who are domestic workers, also stay in the area. Their father was married twice and they have six more siblings in Zimbabwe and another three in Johannesburg.

“It is very difficult getting a proper job without papers,” says Blessing. “I did part time jobs and lived with different people for many years, because I could not afford to pay rent by myself.

“There were a lot of people making shoes in Johannesburg and there was no business, so we decided to move to Cape Town after our sister told us there was no one making them here,” says Blessing.

“I needed to make a living. I love home [Zimbabwe], but it is difficult to make money there,” says Brighton, the youngest. He cuts the leather into shape for his brother to sew.

For materials, they collect old tyres in Masiphumelele, where they cut them into shape for shoes because they do not have a car big enough to transport the tyres to Redhill. They also go to Grabouw to buy off-cut leather from a factory shop for R400 a bag. How many shoes they get out of it, depends on the quality of the off-cuts.

“We can only hope we get a good bag,” says Bruce.

Most of the work is done by hand. A pedal-operated sewing-machine is used to put together the final shoe.

Bruce says they can each sell 30 pairs or more in a month. They share the profits equally. They each pay R400 a month for rent and then there is the cost of the shoe materials. In a very good month they can each make R3 000.

“Some people, especially in Masiphumelele and Capricorn, we give [sell] on credit, because we already have clients that side and have relationships with people,” says Bruce.

The brothers would ideally want to make enough money to be able to go home on a yearly basis and to support their family back home. Blessing has not been home for seven years.