People blame Mugabe for the dire state of Zimbabwe today. However, that is not correct. He is actually a bad – an appallingly bad and catastrophic – effect of Western interference in Africa since colonialism ended. Had the West gone about poverty eradication and development in Africa in the way it should have done, he possibly would never have gained power or, if he did, it would have been short-lived. 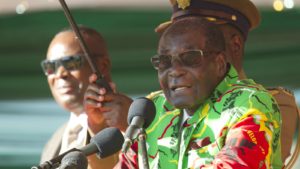 (Zimbabwe is not alone in this. All African citizens should have been taken out of poverty and into Western-style affluence years ago. And the reason they have not – the reason why the gap in incomes between Africans and Westerners has actually WIDENED by a staggering 300% since 1960 – is a direct result of Western interference in Africa – later compounded by China)

Because even dictators cannot survive without money and, without it, they will eventually collapse just as any business would. And Mugabe gets a great deal of the money he needs from the West and China.

For example, in 2015, Zimbabwe’s revenue (which is effectively Mugabe’s income) was US$3.5 billion. In addition to that, he got almost $800 million from Western Official Aid and $500 million from China. So the two together added 37% to his income – a massive boost. In fact, the figure is much higher than this because it does not include a heavy expenditure from Western NGOs.

China has now done even more to keep him in power, with $4 billion in aid and loans for 2016-2018. If the West gives the same as it has in the past, this will increase Zimbabwe’s income by a massive 80%, again increased by Western NGO expenditures in Zimbabwe. Isn’t that the West and China together keeping a vicious regime in power?

The problem with foreign aid and loans is that even if they were all used to help a nation’s citizens (extremely unlikely to happen in an oppressive state like Zimbabwe), they are still helping a tyrant to stay in power. I know it sounds hard, but if all foreign support for Zimbabwe had been stopped as soon as Mugabe’s brutality became clear years ago, Zimbabwean citizens would have got into a far worse state than they have, they would have become fed up with it, and they would almost certainly have rebelled and forced him from power by now.

So all Western aid and loans have done is to help extreme poverty (and, in Zimbabwe’s case, oppression) last for years longer than they should have done. While at the same time helping corrupt and repressive leaders to amass mind-boggling wealth.

Let’s look at how the West could have actually helped Africa’s citizens to escape from poverty into Western-style affluence, instead of helping its corrupt and repressive political leaders to become rich.

The meteoric rise of both the German and Japanese economies after World War II is often described as a “miracle”. It wasn’t. It was fuelled by the Allies, led by the USA, putting the vast bulk of their aid efforts into helping Germany and Japan rebuild their economic, industrial and business bases. The result in both cases were startling.

So I will ask you a question: what would have happened if the West had done what it did in Germany and Japan and, right from the end of colonialism, focused all its aid efforts on helping each African nation to build up its own African-owned business base?

There is no doubt at all that African citizens would by now have been enjoying Western-quality lifestyles or, if not that, then fast approaching it.

The Western aid community say this would not have worked because aid in Germany and Japan was used to rebuild their business bases, whereas in Africa it would have been used to create a business base. The people who give this reason are supposed to be intelligent. Don’t they realise what a lame excuse this is for not doing what they know they should have done, and how stupid it makes them sound?

Let’s look at it from another angle. Africa is not the poor continent the Western aid community, the UN, the World Bank, the IMF and the media would have us believe. It is actually, and by a very long way, the richest of all the continents in terms of raw materials and natural resources.

So what has gone wrong? Had these raw materials and natural resources been found in any developed country, it would have made it extremely wealthy with huge benefit to its citizens. However, in Africa’s case, the benefits from them have gone not to Africa but to the West and China, and very little benefit has gone to the normal African citizen. For instance, the African workers who extract these raw materials only get paid a fraction of what Western workers get for doing exactly the same jobs in their own countries.

So I’ll ask you another question: what would have happened if, instead of the benefits of Africa’s raw materials and natural resources going abroad, they had been retained to benefit Africa and Africans?

Africa would have been able to fund up all its own development, without any need for foreign aid and loans. Africans today would be enjoying Western-quality lifestyles or, if not that, something rapidly approaching it. However, the West and China have no intention of losing the huge benefits they get from Africa. Nor do the UN, the World Bank, the IMF and the WTO because they are dominated by the interests of the wealthy nations.

Let’s look at the problem in another way. There is nothing difficult about what causes poverty, despite the Western aid community and NGOs trying to massively complicate it. There is only one reason why Africans are still in poverty: they don’t have jobs that pay them enough to get themselves out of poverty.

So what is the solution? There is one solution, and one solution only: we have to create a business base that pays the majority of Africans enough to be able to afford a Western-quality lifestyle. It’s not exactly rocket science.

So I’ll ask you again the question I asked earlier: what would have happened if the whole Western aid community had put all their efforts into creating such a business base in each African country immediately after the end of colonialism?

Not only would Africans by now have been enjoying Western-quality lifestyles (or rapidly approaching one), as we saw before, but on top of that, all the aspects of poverty would have disappeared – or nearly so – because African nations would have had the taxation income to deal with them themselves.

Let’s try another view point. It is well-proven that the Western-style democracy foisted on African nations by ex-colonial powers has proved disastrous (as many experienced “Africa hands” said it would) and led directly to the repressive governments that still rule virtually every African nation.

If instead of that model of government, what would have happened if the ex-colonial powers had got African nations to adopt a system of government that was judged entirely on (a) how well it could develop the business base we have talked about, and (b) its ability to spread the increasing profits generated by that business base among all sectors of the population?

The self-seeking governments such as Zimbabwe’s, and which have plagued Africa ever since the end of colonialism, would not have survived. So, again, Mugabe would have lost office very quickly because of his utter failure on both counts. And, again, Africans would by now have been enjoying Western-quality lifestyles or, if not that, then something fast approaching it.

And, again, the need for foreign aid and loans would have disappeared years ago.

The results of foreign interference in Africa have been disastrous, and have led directly to the vast majority of citizens still being in extreme poverty (72% of Zimbabweans earn less than $1.90 a day. Across Africa, 91% earn under $5 a day, and 38% under $1.90 a day), and the persistence of corrupt and repressive governments.

The best and fastest solution to this is for African citizens to take the control they should have had from the start. The AU has given them the means to do this through Agenda 2063 and its accompanying First Ten-Year Implementation Plan 2014-2023.

It asks all African citizens to get involved in Africa’s future, among other things, requiring their politicians and political parties to make Agenda 2063 the basis for their manifestos.

It staggers me that every Zimbabwean activist, campaign and special interest group, and Civil Society Organisation has not understood the enormous power Agenda 2063 gives them all to transform Africa, and are not promoting it as an absolute priority to all citizens and political parties.