There is a grossly false story by Reuters news agency suggesting that President Morgan Tsvangirai is involved in a secret deal with Zanu PF’s embattled Vice President, Emmerson Mnangagwa, to form a coalition government outside of elections. 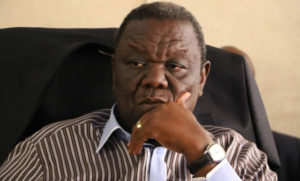 Nothing could be further from the truth.

For the record, President Morgan Tsvangirai has never held any meeting with Mnangagwa, whom he last met four years ago during the time of the inclusive government.

Moreover, President Tsvangirai has not had any meeting with either the British or the military involving this purported deal that shamelessly falls outside the realm of the legitimate process of elections. The electoral process defines the character of the MDC. It is our unstinting belief that any government formed in this country must be a legitimate government that stems from elections, which elections are due in 2018 in line with the country’s Constitution. Any purported deal outside elections and involving diplomats, the military and other such characters will not be legitimate and will not rescue Zimbabweans from their current predicament simply because we are where we are as a country because of the crisis of legitimacy.

While stability is important, President Tsvangirai and the MDC have always placed a far much higher premium on legitimacy and democracy.

The MDC is not and will not be party to the Zanu PF factional wars and the false story by Reuters sadly projects the party and President Tsvangirai as appendages to the vicious quest by one of the Zanu PF factions to take over power outside of the legitimate process of elections.

In conclusion, the MDC has a functional Alliance with several other political parties and groups that have a genuine desire to rescue Zimbabwe from its current abyss after a free, fair and credible election that should be held next year.

The MDC is a genuine and sincere member of that functional Alliance and will not engage in any other clandestine deal that seeks to undermine both the integrity of the Alliance and the legitimate process of elections.

Moreover, that Alliance was formed in fulfillment of a resolution of the party’s Congress, the decision of the national council and in furtherance of the genuine desire by the people of Zimbabwe to see a broad alliance of diverse Zimbabweans coming together to contest next year’s elections as a united front.

It is for that reason that we seek to strongly rebut the Reuters falsehood.