Heal Zimbabwe condemns the organized acts of politically motivated violence that took place in Chitungwiza, Unit N on 22 October 2017 where suspected ZANU PF youth went on a rampage assaulting MDC-T supporters and destroying their houses. A total of 10 MDC-T activists sustained serious injuries and have since been hospitalized. 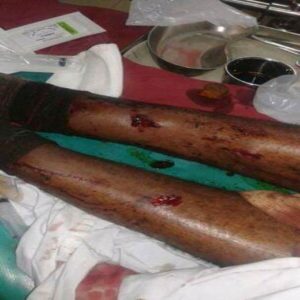 One of the victim receiving treatment at a local hospital after the attack.

These latest acts of violence come hardly a week after three MDC-T supporters were assaulted by unknown assailants on the 18th of October 2017 in Chitungwiza, UNIT J. The unknown assailants accused the three of distributing Biometric Voter Registration (BVR) fliers arguing that only the Zimbabwe Electoral Commission (ZEC) was mandated to do so. The matter was reported at Town Centre police station and no arrests have been made so far. 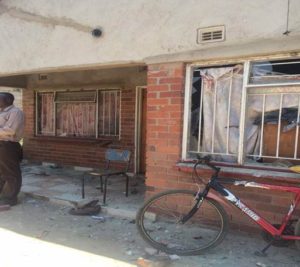 Some of the houses that were attacked by suspected ZANU PF youth in Chitungwiza yesterday.

Heal Zimbabwe notes that such organized acts of violence especially during electoral processes such as voter registration paint a gloomy picture of what lies ahead as the nation prepares for the 2018 elections. Such acts of violence also expose the high level of intolerance among political players which alone poses a serious threat to the holding of free, fair, peaceful and credible elections in 2018. Heal Zimbabwe implores political parties to reign in on errant supporters who perpetrate violence. The police must also launch a thorough investigation and apprehend the culprits.

The upsurge in cases of politically motivated violence also justify why Heal Zimbabwe has been on record advocating for the full operationalization of the National Peace and Reconciliation Commission (NPRC), a constitutional body charged with developing mechanisms for early detection of areas of conflicts and disputes and to take appropriate preventive measures.