Every few years Mugabe wakes up and sees something blindingly obvious to everyone else. His latest insight is that, after 37 years of his rule, Harare’s central business district is a squalid, chaotic mess, overrun by street vendors desperately trying to scrape a living. 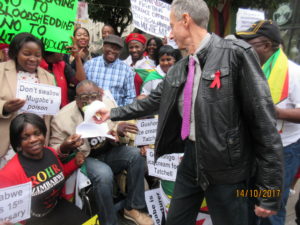 Mugabe said he had only learnt about the situation last week when returning from South Africa. He must have had another eye operation there because those who can see would have noticed that the commercial heart of the  Sunshine City has for long been an eyesore (see: http://www.zimbabwesituation.com/news/zanu-pf-to-blame-for-cbd-chaos/).

After kicking Vice-President Mnangagwa downstairs in a cabinet reshuffle, Mugabe boarded his magic wheelchair to attend the 15th anniversary of the Vigil in London, where he offered veteran human rights campaigner Peter Tatchell a Gushongo ice cream of the type which apparently narrowly failed to remove Mnangagwa from the cabinet altogether. Tatchell responded by thrusting the venomous-looking ice cream back in Mugabe’s face. Mopping his head, Mugabe  departed quietly in his wheelchair, perhaps accustomed to such treatment from his wife.

Peter Tatchell was presented with a copy of the new Vigil book ‘Zimbabwe Emergency’ in thanks for his tireless support over the years. As the book records, he was beaten up by Mugabe’s security guards for attempting to arrest him for human rights abuses.

Supporters from the earliest days of the Vigil joined us to mark the anniversary, among them Patson Muzuwa who, with Cephas Maswoswa, electrified the dancing, drumming and singing. Patson, along with Addley Nyamutaka, who also joined us with her son Mandla, were survivors of Mugabe’s torture. The Vigil was glad to welcome back other Vigil stalwarts such as Sue Toft and her daughter Francesca and her husband Kelvin Kamupira and Ian Pocock who looked after our facebook page. We were also joined by the Zimbabwean journalist Geoff Hill (formerly of the Washington Times) who has written several books on the Mugabe regime, and Christopher Maphosa whose story was dramatised in the play ‘The rain that washes’.

FOR THE RECORD: 69 signed the register.