People march past an armoured personnel carrier towards the State House during a demonstration demanding the resignation of Zimbabwe's president on November 18, 2017 in Harare. Zimbabwe was set for more political turmoil November 18 with protests planned as veterans of the independence war, activists and ruling party leaders called publicly for President Robert Mugabe to be forced from office. / AFP PHOTO / - 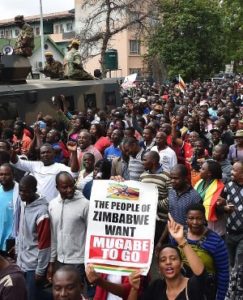