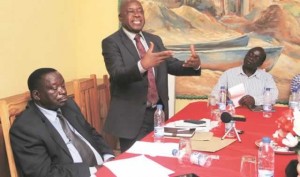 “When we wanted to show this regime that we the fighters of the liberation were the ones who brought Zanu PF and Mugabe to power and that we were not happy, we became victims of violence which hit the conscience of all Zimbabweans. You all know that two years ago we were tear-gassed and water cannoned by the Zimbabwe regime,” Mutsvangwa told journalists in Harare.

The Zimbabwe National Liberation War Veterans Association (ZNLWVA) chairperson, said they were still nursing the wounds from the police brutality.

“It was a painful occasion and we want people who did that to be still accountable in the fullness of time, but what it also did is that it opened the eyes of the Zimbabwe people as to the extremities to which this regime would go to try to maintain its power,” he said.

Mutsvangwa said the CIO was also at the centre of promoting corruption and human rights abuses.

“All the rot which have forced you the people of Zimbabwe to suffer so much, the CIO should have been vigilant. All the problems which have finally forced the Army which is normally there to just protect the boarders to intervene in national politics would have been corrected if the CIO   and the police had done their  job and we are saying you were derelict on duty Bonyongwe (former CIO boss) as Mugabe was,” said Mutsvangwa.