Johannesburg – Zimbabwe's only independent member of Parliament and former Zanu-PF member Temba Mliswa says citizens in that country are happy that their lives have been placed in the hands of the military. 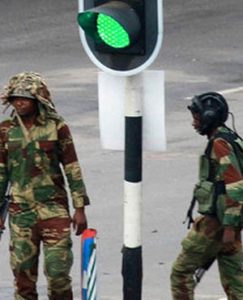 The Zimbabwe Defence Forces (ZDF) on Wednesday announced that it had taken over the country and was keeping the country’s President Robert Mugabe and his family under guard at his home as the military was getting rid of the “criminals around Mugabe”.

On Monday the ZDF warned the 93-year-old leader that it would intervene if he continued purging party veterans in a bid to see his wife, Grace Mugabe, become his successor.

The takeover, which has largely been described as a coup, also saw the arrest of several ministers and members of the so-called “Generation 40” group within the ruling party.

The faction is believed to have been working to ensure Mugabe’s recently fired vice president Emmerson Mnangagwa would never ascended to the presidency.

“Even if there was a coup people would celebrate. This is the biggest celebration after 1980 independence. The people of Zimbabwe have been oppressed, the democracy that was there has been violent,” said Mliswa who insists that a coup did not take place in his home country.

He said the army was following its mandate of stepping in to preserve the interests Zimbabweans.

“When the government is not sticking to its core values in ensuring that the manifesto they promised people is delivered, from an economic point of view it creates problems,” he said.

He, like many others, pinned the current developments on Grace Mugabe.

“When the president of the country is no longer the president and there is a de facto president it brings instability. As a result, you have the army, the last line of defence. From a constitutional point of view, the preamble of our Constitution has been very clear and it’s important for people to understand that the army and war veterans have always been part of Zanu-PF. They are the founders of Zanu-PF,” explained Mliswa.

He accused the first lady of trying to usurp her husband’s powers and mandate as the elected leader of the country.

He added that the already economically ailing country was likely headed for chaos.

Below is a video of the former Zanu-PF member explaining the dynamics that lead to this current development.

“She has not been behaving the way we expect of a first lady. She has been insulting people, going around the world beating people. She has also been spending money extravagantly in South Africa when the country is suffering,” he said describing why some took issue with the first lady.

Mliswa also accused Grace Mugabe of being instrumental in the making of decisions to get rid of key members and veterans of the ruling party. These include the axing of President Mugabe’s former second-in-command, Joice Mujuru, and the recently expelled Mnangagwa.

“The ANC wouldn’t allow a situation where uMkhonto weSizwe is now distant from the ANC because you can’t separate the two, it’s the same situation there,” he said.

“The Constitution is very clear when it comes to section 2.1.2, which empowers the defence forces to step in when there is a threat to national security and interests of the country and territorial integrity,” he said describing the Zimbabwean first lady as the identified threat.

“You’ve got to understand that whether you like it or not he (President Mugabe) is in power through his party, just like Jacob Zuma. His party can actually remove him. You are not in power for the rest of your life,” said the MP.

“When a process that put you in power is also convened to get you out of power, allow it to happen,” he said.

He added that Mugabe was only in power because Zanu-PF, that country’s liberation movement, was in power.

Mliswa questioned the selective attempt by the regional body to intervene, saying the army in Zimbabwe was a part of everyday life and that it often stepped in to assist when needed. He cited as examples members of the defence forces building hospitals and assisting with the evacuation of people in emergencies.

“No one has died from a civilian point of view. There is harmony, there is peace,” he said adding that Zimbabweans had not appealed to Zuma and the SADC to intervene in the internal matters of their country.

Mliswa said if regional leaders had wanted to get involved in the country’s affairs they should have sat Mugabe down and advised him against allowing his wife to make moves for the presidency.