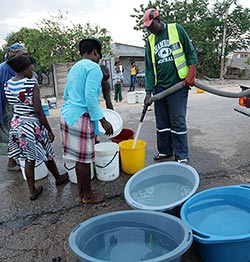 The MDC is a social democratic political party that advocates for people-centred policies and programs. As such, the provision of clean and safe water to all the residents of Harare and indeed all other urban and rural settlements in Zimbabwe is central to the party’s development trajectory. It is regrettable that the residents of the city of Harare sometimes fail to access safe and clean water for their daily usage. The MDC calls upon the responsible central government authorities, particularly the RBZ, to always ensure that adequate foreign currency is allocated for the importation of water treatment chemicals.

We don’t want a situation whereby the residents of the city of Harare will be susceptible to acquiring water-borne diseases such as cholera and typhoid as a result of failure to access clean and safe water.The RBZ should appreciate that the provision of clean and safe water is just as critical as the the provision of foreign currency to import fuel and other essential commodities into the country.

We are pleased to note that the RBZ has since pledged to make sure that adequate foreign currency will be provided to avoid a situation whereby urban residents will not have access to clean and safe water.Indeed, water is life and we cannot talk about sustainable socio-economic growth and development when the majority of our urban dwellers cannot access clean and safe water.

The city of Harare is the capital city of Zimbabwe and as such,it should be allowed to be a showcase of sound and proper local authority management in order to send the right message to prospective domestic and foreign investors. Central government shouldn’t allow a situation whereby the day to day management of the affairs of the capital city are sabotaged by corrupt and ill-intentioned bureaucrats who seem not to have any respect whatsoever for elected city councilors.

The MDC shall continue to conscientize all its elected councilors and other officials on the paramount importance of discharging their duties diligently and also with honor and integrity.