The Zimbabwe Human Rights NGO Forum (the Forum) expresses its condolences to the Lumbe family following the killing of their two-year old son, Professor Lumbe, who was found dead on the 10th of June 2018 under unclear circumstances. 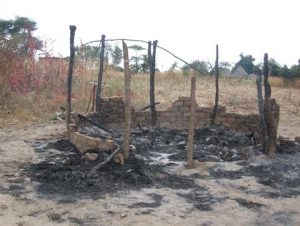 Professor Lumbe went missing from home on the 9th of June around 1400hours and was found dead in a soya beans field on the 10th of June with physical injuries. According to the Notice of Death issued on the 11thof June, 2018 the child had several head injuries.

The parents believe that Professor Lumba’s killing was politically motivated. There is evidence of political rivalry and tensions involving the father and ZANU-PF supporters. In 2014, Mr. Rambai Lumbe, the father of the deceased, defected from ZANU-PF to join the National Peoples’ Party (NPP) then the Zimbabwe Peoples’ First party led by Dr. Joice Mujuru. Mr. Lumbe is the Mazowe North parliamentary candidate for NPP in the 30 July 2018harmonised elections.

Findings from an investigation carried out by the Forum on the 12th of June at Sunridge Farm in Mazowe North where the family resides revealed the existence of longstanding political tensions between the family and some ZANU-PF supporters stretching back to 2014 when the family defected from ZANU-PF.  According to the family, in 2017 they received threats from four (4) ZANU PF activists namely Paradzai Zhiyamoto, Cephas Muzongondi, Watson Shereni and Elvis who warned the Lumbe family that “munopedza mhuri” (you risk having the whole family killed) for supporting NPP. The matter was reported to Glendale Police Station only to be withdrawn when the four apologized to the family.  On another occasion, ZANU-PF members attempted to demarcate the Lumbe’s family piece of land citing the same reasons and were saved by the intervention of the police.

Given the existing political tensions and levels of intolerance existing between the Lumbe family and ZANU-PF supporters, the family strongly believes that their son was a victim of political violence as their rivals have often harassed and intimidated them. While we acknowledge the swift action by the police in commencing investigation, we must be mindful of the history of elections in Zimbabwe, which is littered, with episodes of political violence characterized by such heinous crimes as murder. In most cases, perpetrators have gone unpunished. Irrespective of any reason behind the gruesome killing of the two-year old, the needless loss of life is unacceptable.

As Zimbabwe approaches the 30 July 2018 watershed plebiscite, the police must prioritise the investigation and prosecution of all cases of political violence without fear or favour.  The President has been calling for free; fair, credible and violent-free elections and such actions fly past in the face of the President. As a nation, we must embrace the President’s calls for peace and non-violence and  adopt a ‘zero tolerance’ approach to political violence be it intra or inter-party violence. All political parties must respect the constitution.

Elections come and go.  Hurts to families who lose their loved ones remain. The Forum condemns these barbaric acts of violence for political gain. Violence against children is utterly unjustifiable. Children pause no threat to anyone and such acts cause shock and horror in any civilized society. The police must move in quickly to ensure that justice is swift. Perpetrators must face justice and a strong message must be sent to everyone that these acts are unacceptable. The Forum urges the Zimbabwe Human Rights Commission (ZHRC) to be seized with this matter and ensure access to remedies for the Lumbe family.

The Forum draws attention to the fact that life was lost, possibly due to political tensions that were left unaddressed. Zimbabwe has established the National Peace and Reconciliation Commission (NPRC) for purposes of early detection of conflict and violence prevention. The Forum urges political actors and parties to take active steps to address any tensions that may result in violence and not wait until it is too late. The Forum also urges the NPRC to investigate political tensions in the area and assist in the resolution of any conflicts to avoid any further violence.

The Forum will continue to follow the human rights situation during this period, always ready to assist victims of any violations to ensure access to remedy and prevention of further violations.