A supporter of the opposition Movement for Democratic Change (MDC) Alliance gestures the party's symbol from inside of a prison truck following their appearance at the magistrate's court in Harare, on August 6, 2018 after many MDC supporters were arrested following a post election violence. Twenty seven members of the MDC opposition appeared in court on violence charges after the protests against alleged cheating by President Emmerson Mnangagwa and the ruling ZANU-PF party in the election. Since the knife-edge election result was declared, the MDC say they have been the target of a brutal crackdown that exposes Mnangagwa's claims to respect rights and halt repression. / AFP PHOTO / Zinyange AUNTONY 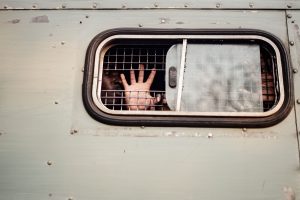