Mourners gather around the coffin during the funeral ceremony of Ishmael Kumire, 42, shot during post-election violence on August 1 in Harare, at his homestead in Chinamhora village, Domboshava, outside Harare, on August 4, 2018. Kumire was shot dead while standing at his fruit vending stall in Downtown Harare as violence erupted after the historic first elections following the downfall of the former president. At least six people died after troops in the capital Harare opened fire on demonstrators August 1, sparking an international outcry and raising grim memories of post-election violence under the former president's repressive rule. / AFP PHOTO / Zinyange AUNTONY 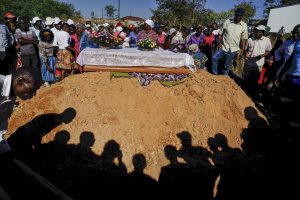