Zimbabwean police officials look at detained civilians as they stand in an armoured vehicle outside MDC party headquarters in Harare on August 2, 2018, after they allegedly sought refuge in the building during unrest on August 1. - Zimbabwe is awaiting the outcome of presidential elections that have plunged the country into bloodshed and protest, stirring memories of a traumatic past. A day after six people were killed in an army crackdown during demonstrations against alleged electoral fraud, the capital Harare -- its centre cleared by troops -- braced for the announcement of the results later Thursday. (Photo by MARCO LONGARI / AFP) (Photo credit should read MARCO LONGARI/AFP/Getty Images) 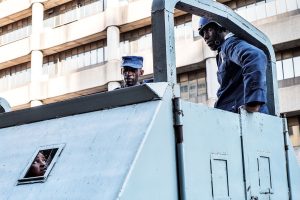