Police in Zimbabwe are reportedly being left out in the ongoing investigations into a bombing incident that took place at a Zanu-PF rally in June and left at least two people dead and several others - including senior party officials - injured. 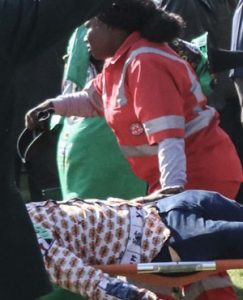 Injured people are evacuated after an explosion at the stadium in Bulawayo where Zimbabwe President just addressed a rally. (Picture: AFP)

According to Daily News, unnamed police sources said the investigations into the deadly bombing were still “inconclusive” despite President Emmerson Mnangagwa’s claims that those responsible were now known.

Mnangagwa told his supporters in August that suspects behind the bombing incident were now known and were to be dealt with after the country’s election period was concluded.

“We now have the knowledge of who did it. We want the current (electoral) processes to pass then we will deal with that matter,” the state-owned Herald newspaper quoted Mnangagwa as saying.

But a top security agent told Daily News that the police were yet to identify and arrest those involved.

“This is a high security issue, maybe those in Harare know things that we might not know here. Remember we have been shut out of this. But as far as we are concerned here in Bulawayo, we are still hunting for the suspects,” the unnamed top police official was quoted as saying.

Police spokesperson, Charity Charamba, also claimed she was in the dark, the report said.

The explosion rocked the White City Stadium where Mnangagwa was addressing thousands of his supporters.

Mnangagwa managed to escape unhurt, while over 40 people, including the president’s two deputies were injured.

One of the vice presidents, Kembo Mohadi and Zanu-PF Chairperson Oppah Muchinguri Kashiri were airlifted to South Africa for medical treatment.