Harare - Four people was killed yesterday afternoon when the driver of their car was trying to avoid a head-on collision with a haulage truck at Mupfure bridge, 10 kms from Chegutu. 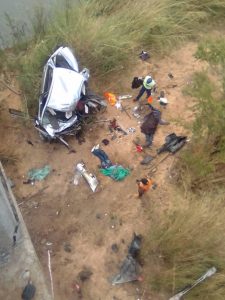 Three people from the car were killed instantly when the car plunged into the river bed under the bridge which is on the Harare – Bulawayo highway.

The driver of the TOYOTA Allion had attempted to overtake in the face of on- coming vehicles before deciding to go back to his side when he over-steered, hit the bridge girders and flipped into the the river below.

The fourth person died on admission to hospital.

Police spokesperson, Assistant Commissioner Paul Nyathi confirmed the accident and the four deaths.
Passers-by had to fetch police from Chegutu town after they told callers that they did not have transport to attend the scene of the accident. The dead and injured were ferried to hospital by samaritans.