Women’s Academy for Leadership and Political Excellence (WALPE) was officially launched in Masvingo on Friday 07 December 2018. 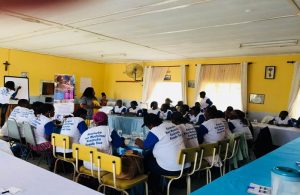 WALPE is a women’s political empowerment and leadership academy set up to advance knowledge and deepen the capacity of women who want to successfully run for public elected positions. It seeks to provide women with technical and practical trainings that empower them to run for public office.

The academy is driven by the need to challenge the status quo, through creating platforms and opportunities for women to get into decision making and leadership positions.

WALPE was officially launched in Masvingo as part of the institution’s nationwide reflection indabas currently taking place. The meetings are reflecting on women’s participation during the whole 2018 electoral process. Fifty (50) participants from all of Masvingo Province’s seven districts (Chivi, Zaka, Bikita, Chiredzi, Mwenezi, Gutu and Masvingo urban) attended the activity whose objective was to undertake a gendered reflection of the 2018 elections and raise the issues which need attention going forward. The women leaders were drawn from ZANU PF, MDC, NCA, independent candidates and student leaders. 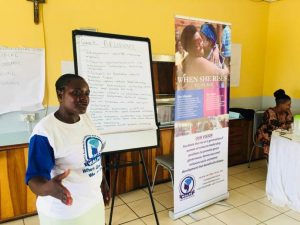 Part of the participants were women leaders who participated as candidates at primary election level and also at the harmonised elections but failed to make it. Some of them have been contesting as candidates in the past elections but still failed to win. And the other ones intend to contest in the 2023 plebiscite. The youthful participants were female student leaders drawn from Great Zimbabwe University and Masvingo Polytechnic College who are or intend to run as Student Representative Council (SRC) leaders.

As WALPE we are non-partisan and will work with all women from different political parties because our objective is to increase women representation in the presidium, parliament and local authorities which is actually decreasing. For example according to the Zimbabwe Electoral Commission (ZEC) in 2013 we had 29 women elected in parliament but in the 2018 elections the number dwindled to 26.

“..We also want to improve the quality of women leaders elected in political offices through taking them through vigorous long term trainings, mentorship and coaching exercises. The organisation shall also push for women in both rural and urban areas to occupy local elected leadership positions in their communities such as School Development Committees and Health Development Committees…” said Ms Stabile Dewa, the Director of WALPE in her presentation.

The Indaba proceeded to scan the prevailing environment and participants generally agreed that the prevailing political, economic and social environment is not conducive for promoting effective women participation in leadership positions. Shortages of basic commodities, runaway inflation, fear and intimidation, sexual harassment, patriarchy and monetisation of campaigns were identified as some of the challenges negatively affecting women’s robust participation in political processes.

After scanning the environment, the women reflected on the roles they played during the 2018 election season. Some of the roles included mobilising fellow women and the general citizenry to go and register to vote and actually vote, voter education, being candidates and being agents of their different political parties. They however raised a red flag on how political parties stifle internal democracy by side lining women candidates resulting in few women making it to Parliament or Council.

As part of commemorating the 16 days against Gender based violence, violence and intimidation was also singled out as a factor which deterred many women from taking up leadership roles during the elections.

“..We want the State to ensure that our elections are genuinely free, fair, credible and violence free so that we as women can freely participate..,” one of the participants from Chivi district stated. This was echoed by WALPE programme Officer, Batanai Mapinde saying “…Violence should have no space in our politics and as women we must be each other’s keeper regardless of which party we belong to. We must work to promote peace…”

The women then set out to identify opportunities for their leadership growth in their communities. Key opportunities which they identified included the need for servant leadership in communities, the many challenges which require solutions and the resourcefulness of women who are able to respond to these issues.

Next WALPE will go to Manicaland Province as the nationwide consultations continue. WALPE so far is the only political academy targeting to develop women leaders in the history of Zimbabwe.

When She Rises We all Rise.