Mounted police patrol in Bulawayo on January 16, 2019, as shops and offices remain closed for business in the central business district following violent protests in the country triggered by a sharp, sudden rise in fuel prices. - A wave of protest erupted in Zimbabwe on January 14, prompting a security crackdown in which at least five people were shot dead, Human Rights Watch said. The nationwide protests were triggered by the president's move to double fuel prices at the weekend as the country's economic crisis deepens. Zimbabwe's mobile phone networks and internet were shut down for the second day on January 16. (Photo by ZINYANGE AUNTONY / AFP) 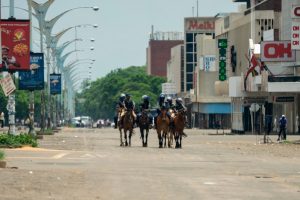