Zimbabwean doctors and nurses demonstrate in Harare on November 18, 2008. Truckloads of riot police were deployed outside Harare's main hospital to prevent scores of doctors and nurses from marching in protest at the state of Zimbabwe's collapsing health system. At least 50 people are believed to have died of cholera this month, according to health officials, due to the rapid break down in sanitation in many parts of the capital. AFP PHOTO / DESMOND KWANDE (Photo by DESMOND KWANDE / AFP) 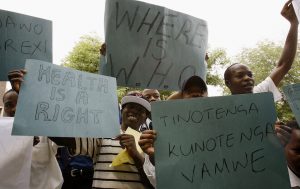