Mwenezi, Zimbabwe (CNN)Jemitias Denhere shakes his head as he explains why, despite being a specialist in soil management and crop production, he specializes in beef livestock. 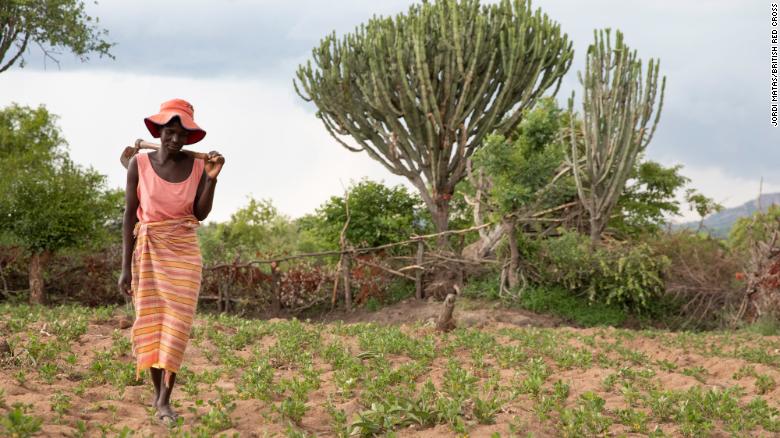 Tarisai Mubhoyi, 43, farms her field of ground nuts that she’s been able to grow despite the drought.
The district agronomist — plants specialist — owns 27 hectares of land in the Mwenezi area of southern Zimbabwe, a particularly arid location. Here, farmers endure extreme weather challenges such as drought and flash flooding — and, thus, some of the highest food shortages.
His cattle can exist on the little grass that remains during dry times, but to produce crops without irrigation is risky — so he decided against it. “One year, you win; one year, you will fail; repeat,” he said.
But over the past five years, the situation has become worse.
One of the rising uncertainties climate change is bringing to the country: The rains have come much later, with the November rainy season beginning as late as January — and when it comes, there’s less of it, sometimes falling for just one day.
“We’re experiencing the worst style of drought. If we receive rains, it will be like a cyclone: very violent, too windy. Very erratic. So you cannot bank on it. Things are changing every day.”
As a result, maize, the staple diet of rural Zimbabweans, can no longer be counted on with traditional farming methods.
Denhere, a university-educated professional who has trained in Brazil and China, is one of the lucky ones, with a salary as the district agronomist and 25 cattle.
But about 80% of Zimbabwe’s population — rising to 90% in this area — are subsistence farmers, meaning they rely on rain-fed agriculture to feed themselves and their families.
Life as a farmer in Zimbabwe is tough, with lack of water, poor sanitation and little food. It’s common to have only one or two meals a day of sadza, a porridge dish. Extreme weather is adding to the problem, with most agreeing that conditions are very different from 20 or 30 years ago. 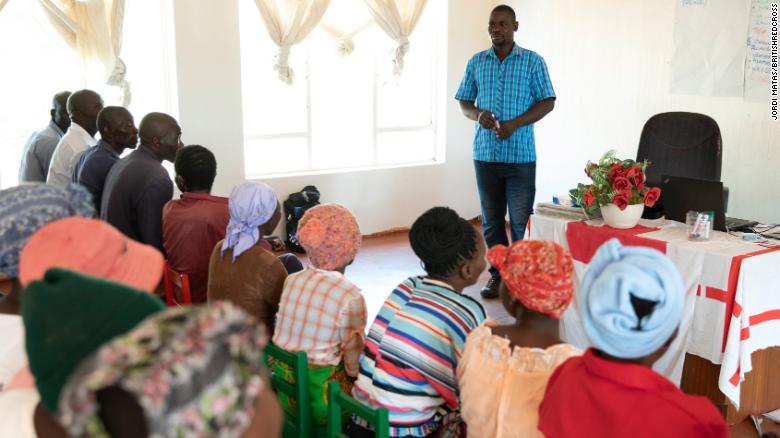 Jemitias Denhere, Agriculture Officer, teaches a class of farmers from across Mwenezi at the Red Cross farming school.

‘Gambling on the rainfall ‘

Tadios Chikuko, 44, began farming as a boy and inherited his parents’ land in the small village of Mharadze in Mwenezi district, about 100 miles from the South African border. He says the weather started to change dramatically in 2000.
Traditionally, he has grown maize in the red clay soil, on one field around his compound and another 7 kilometers (4.3 miles) away. But he’s had to diversify to feed his family of four sons and two daughters, aged between 9 and 22, as well as his wife and sister-in-law.
He now plants small grains such as sorghum and finger millet, as well as velvet beans because they are naturally more resistant to drought and have shorter seasons, so there is less risk if a whole harvest is lost.
“Previously, we could rely on the weather. Now, we are gambling on the rainfall.”
Food shortages are already acute. The Zimbabwean government estimates that more than 2.4 million people in rural areas will face acute food insecurity at the peak of the current “lean season” of January to March. 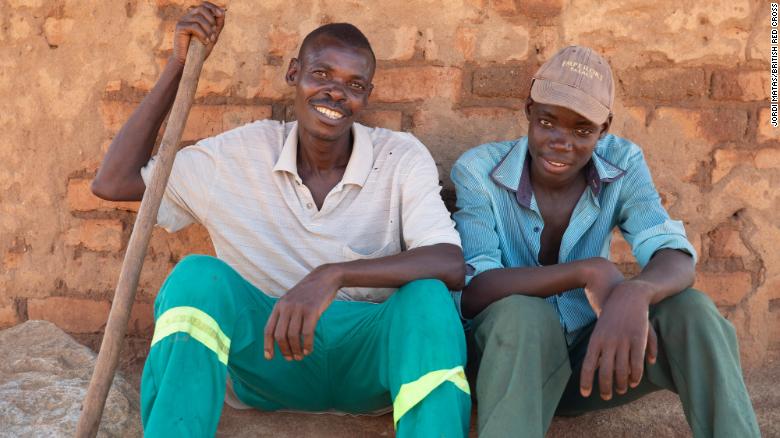 Overall rainfall has declined nearly 5% across Zimbabwe during the past century, according to a report on climate change from the Zimbabwean government and the United Nations Development Programme last year.
It describes the climate changes as threefold: Not only is there less rain, but it now rains at a different time of the year and in different areas. It’s erratic.
In Mwenezi, people have also reported heavy hailstorms and strong winds that have destroyed crops.
Climate change will affect gender ratio among newborns, scientists say
“It’s clear that people are feeling increased uncertainty about the weather,” said Maarten van Aalst, director of the Red Cross Red Crescent Climate Centre, which advises the Red Cross globally. But he adds that while it’s known that climate change is bringing more heat and rising risk of drought to this area, there is no clear scientific evidence about changes in hail or strong winds — mainly because researchers don’t have the data.
Separate from these climate changes is the weather phenomenon El Niño, a fluctuation in the climate system that warms the sea surface temperature in the Pacific. In 2015-16, this caused a drought in Zimbabwe, followed by flooding. Staple crops such as maize were wiped out, and more than 2.8 million people were left in need of food aid, with then-President Robert Mugabe declaring a state of disaster.
Petteri Taalas, secretary-general of the World Meteorological Organization, says another El Niño is now likely, and although it won’t be as bad as four years ago, it will still have “considerable impacts” such as higher-than-normal temperatures and a more prolonged dry spell.
But the consequences of such extreme weather go even further, beyond livelihoods, hunger and education, to the population’s health — including HIV.

Restaurant owner Musa Sibanda, 56, a volunteer with the Zimbabwean Red Cross, says she commonly sees people living with HIV who have complications after harvest failures because the lack of food affects the effectiveness of their treatment.
They may take the pills without food and feel ill, or perhaps they don’t take the pills at all, with fatal consequences, she said.
Patients need to be well-nourished to take the medication, but they rely on a good harvest to feed themselves, District Medical Officer Dr. Itai Matibiri explained. If they don’t have enough food, their already-vulnerable bodies will not respond as well, and they may experience side effects such as nausea and stomach upset, he said. 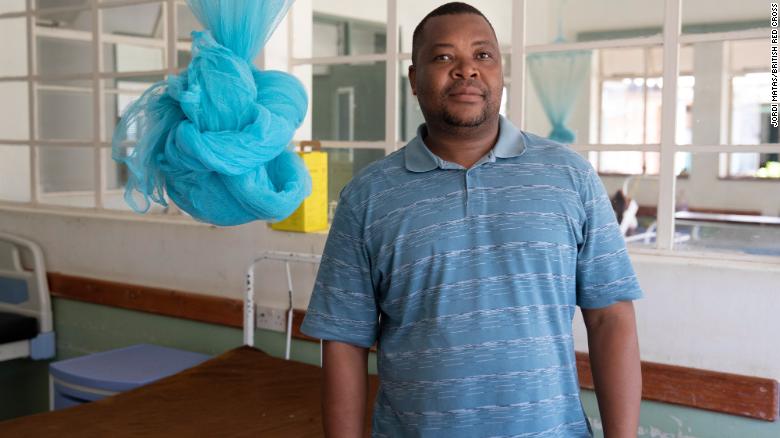 Dr. Itai Natibiri is one of the two doctors at Neshuro District Hospital.
Zimbabwe has the fifth-highest HIV rate in the world after eSwatini (formerly Swaziland), Lesotho, Botswana and South Africa, with a 13.3% prevalence among 15- to 49-year-olds, according to UNAIDS data. An estimated 1.3 million people were living with the virus in 2017, with 41,000 new cases that year, the organization estimates.
Reported access to antiretroviral therapy in Zimbabwe is relatively high at 84%, and treatment is free. But adherence is a big issue.
Without their medication, their viral load — the number of HIV viruses in the bloodstream — increases, said Miatibiri, who is one of just two doctors working out of Mwenezi District Hospital in Neshuro, which covers a population of 202,000 across an area of 5,000 square miles.
In addition, when they don’t have food to sell, they can’t pay for transport to pick up their medicine, he said.
Tarisai Mubhoyi, 43, who lost her husband to AIDS in 2008, admits that she has skipped her HIV pills to avoid the side effects on occasions when she has had no food. When she does have food, it’s often a simple dish of sadza porridge and dried vegetable relish. 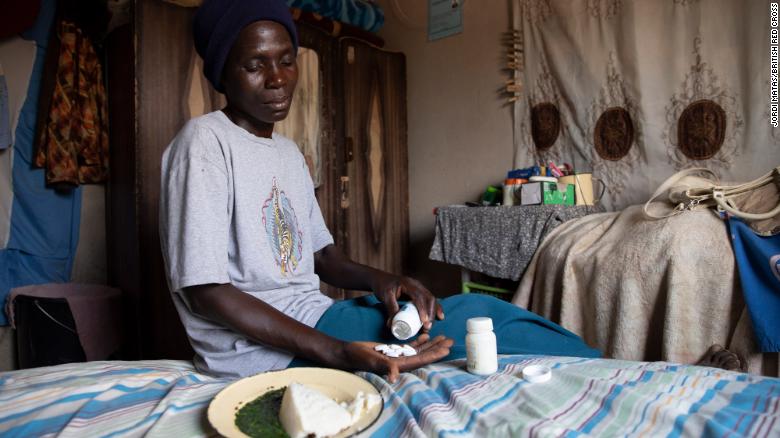 Tarisai Mubhoyi with her HIV medication at her home in Neshuro.
“When I take my medication without food, I feel very weak with stomach pains. I ask myself, is the medicine being rejected by my body, or is my body falling ill again?” she said.
The mother of five maintains her two-field smallholder farm in Mwenezi district while struggling with night sweats, severe headaches and weakness because of her HIV.
Last year, when a hailstorm destroyed her maize crop as it was flowering, she often had just one meal a day and at times went without food completely in order to feed her children.
“To get enough food without the rains is close to impossible,” she said.
Drought and resulting issues around food security were also shown in a recent study to affect rates of new HIV infections. The research by Columbia University, the Lesotho Ministry of Health and the US Centers for Disease Control and Prevention found that adolescent girls exposed to severe drought conditions in rural Lesotho had higher rates of HIV. They were also more likely to engage in high-risk behaviors, including sex work, and were more likely to drop out of school.
“Climate extremes are often associated with changes in behavior as people struggle to survive in the face of loss of agricultural production.,” wrote lead author Andrea Low, assistant professor of epidemiology at the Mailman School of Public Health at Columbia University. “As people, particularly women, address their food insecurity, they may be less likely to take steps to protect themselves from HIV infection.”

Today, Mubhoyi has a regular supply of tomatoes, okra and spinach after Red Cross volunteers showed her how to establish a keyhole garden outside her front door. This 2-meter-wide circular raised garden, with a composting hole in the center, uses household wastewater to grow nutritious vegetables. 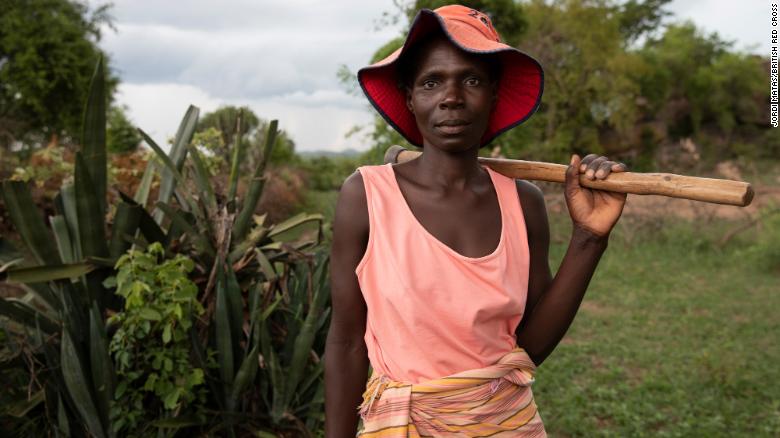 Tarisai Mubhoyi, 43, has been able to send her children to school and grow nutritional food to stay healthy.
With money from selling tomatoes, she’s been able to buy schoolbooks and stationery for her children. “It’s easy to maintain and does not need much labor. We’re having better meals at more regular intervals.”
She has also planted her two fields with drought-resistant varieties of short-season crops such as ground nut and millet to maximize her chances of a good yield.
Mubhoyi is adamant that she will take her HIV medication, made easier by produce from her garden. “If I didn’t take the medicine, I don’t want to find out what would happen.”
Meanwhile, Chikuko has the opportunity to learn climate-smart agriculture techniques at the Red Cross Farming Centre of Excellence at Neshuro, 2 miles from the district hospital, by experts like Denhere, the district agronomist.
He’s been taught about mulching, to trap moisture into the soil, as well as using short-season varieties that ripen in two months instead of six, giving him more reliable produce.
In two years, he’s had remarkable results.
Last year, he planted two fields with maize, one in the traditional way and one using his new skills. The difference couldn’t be clearer: While many shoots in the traditional field are just starting to poke through the earth, the climate-smart maize has ripened and is a foot higher. 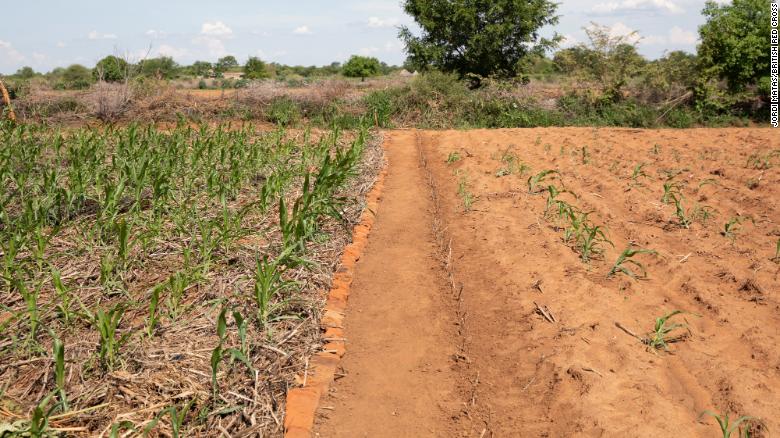 The field on the left uses climate-smart agricultural technique of mulching, so maize has been able to grow better and will produce more food.
And due to diversifying away from maize in the past couple of years, Chikuko has also been able to sell 10 to 15 kilograms of velvet beans beyond what he needed for his family and income. As a result, he has been able to build an extra room on his house and pay all of his children’s school fees.
Chikuko is one of 200 lead farmers teaching these new ways in the Mwenezi district under a community resilience program run by a partnership of the Zimbabwe and British Red Cross that could have a huge impact on the triple challenge of climate change, food security and HIV.
“No matter (if) you get small rainfall, you are going to get a better yield than with the old systems,” he said.
Post published in: Featured