People take selfie-pictures with Zimbabwean Defence Force soldiers during a march in the streets of Harare, on November 18, 2017 to demand to the 93 year-old Zimbabwe's president to step down. Zimbabwe's president clings to office, the military is in power and the much-feared ZANU-PF party still rules -- but Zimbabweans put such issues aside on November 18, 2017 to happily embrace what they hope is a new era for the country. / AFP PHOTO / STR (Photo credit should read STR/AFP/Getty Images) 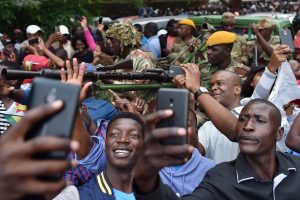