epa05651062 A man holds the new one dollar bond coin in Harare, Zimbabwe, 28 November 2016. The Reserve Bank of Zimbabwe has introduced bond notes to ease cash shortages. The bond notes will be at a par with the United States dollar. The Southern African nation ditched its on currency for a basket of foreign currencies in 2009 after its value was decimated by hyperinflation. Low exports and smuggling of the United States dollar has resulted in the shortages of the US dollar as epitomised by long queues outside banking halls. EPA/AARON UFUMELI 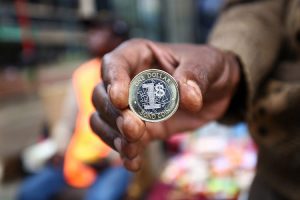