A woman walks in front of a picture of Zimbabwe's President Emmerson Mnangagwa as ge addresses a ruling ZANU-PF party rally in Bulawayo on June 23, 2018, during a campaign for votes ahead of nationwide elections due on July 30. - Zimbabwean President Emmerson Mnangagwa survived a blast at a ruling ZANU-PF party rally his spokesman said, adding that he had been taken to safety after the incident. An AFP correspondent at the scene reported multiple injuries but could not immediately give a precise toll. (Photo by ZINYANGE AUNTONY / AFP) 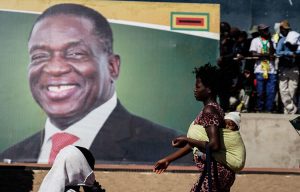