(FILES) In this file photo taken on April 01, 2019 debris and destroyed buildings which stood in the path of Cyclone Idai can be seen in this aerial photograph over the Praia Nova neighbourhood in Beira. - Daviz Simango, mayor of Beira on the Mozambican coast, had worked hard to shore up the city's climate defences, drawing on World Bank help to build deterrents against rising seas, flooding and storms. But in just a few hours last month, Cyclone Idai devastated the city of half-a-million people and wiped out his efforts. (Photo by Guillem Sartorio / AFP) 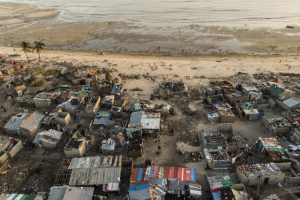