Supporters of MDC (Movement for Democratic Change Alliance) leader and opposition presidential candidate cheer outside the MDC headquarters in Harare, on July 31, 2018. Zimbabwe's opposition MDC party on July 31, 2018 claimed victory in the country's historic elections, setting the scene for a showdown with the ruling ZANU-PF that has held power since independence in 1980. Senior MDC official Tendai Biti said party leader Nelson Chamisa had won the presidential race, and alleged that the authorities were delaying the publication of results. / AFP PHOTO / MARCO LONGARI 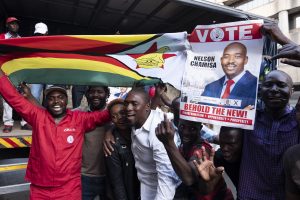