A protester holds a sign during a demonstration by opposition parties against the introduction of bond notes as a currency in Harare on November 30 2016. A token currency issued in Zimbabwe this week to ease critical cash shortages has brought little relief as desperate customers queue for hours to withdraw money while some traders reject the new notes. The central bank on November 28, 2016 issued $10 million in US dollar-equivalent "bond notes", ignoring resistance from citizens and companies who feared a return to the days of hyperinflation. / AFP PHOTO / Jekesai Njikizana 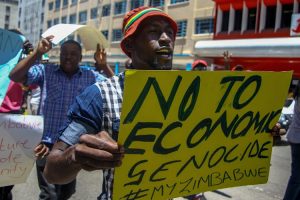