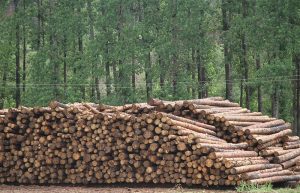 “I cannot get timber the way we used to,” he said at his workshop in the city of Bulawayo where he makes wardrobes, beds, chairs and other wooden furniture.

“Suppliers tell us there is no timber — and I am hearing it for the first time that there can be a shortage of such things as wood,” he told the Thomson Reuters Foundation.

The situation has arisen as Zimbabwe’s forests are falling at a rate that has pushed authorities to try to stem the trend.

About 70 percent of the country’s population of 13 million lives in rural areas where there is no electricity, with many still using wood to cook and cure tobacco.

Meanwhile, the revenues of timber-dependent small businesses such as carpenters and wood-workers — some of whom make coffins — are coming under pressure, not just from the country’s economic hardships but deforestation as well.

Wisborn Malaya, secretary general of the Zimbabwe Chamber of Informal Economy Associations, said timber shortages were hurting the more than 20,000 carpenters operating in backyard workshops across the country.

Suppliers are facing difficulties in sourcing enough timber, as some forests have been invaded by people seeking land to build homes, while illegal settlers are burning down trees to clear land for farming, which is damaging timber stocks, Malaya said in emailed comments.

Forest and woodland resources now cover 45 percent of the country’s land area, down from 53 percent in 2014, she noted.

“Already this points to major deforestation,” Makoto said by email.

As part of its national action plan for the U.N. Paris accord on climate change, Zimbabwe aims to reduce emissions from deforestation and forest degradation. Trees release planet-warming carbon dioxide when they are burned or rot.

It has a national tree planting day, and expects to plant 15 million trees annually, according to the Forestry Commission.

But stemming deforestation remains a tall order, said Andrew Mills, director of the Harare-based Sustainable Afforestation Association, a group of tobacco farmers who are leading a campaign to plant about 9 million tree seedlings per year.

Mills said felling indigenous trees for tobacco-curing was a “significant factor” but not the biggest cause of deforestation, accounting for about 15 percent, the association estimates.

Other major factors are the use of wood as cooking fuel, and the clearing of land for homes and farms.

Under the Forest Act, anyone who cuts, damages, destroys, collects, takes or removes trees or timber without a licence faces a fine of about $100 or two years in prison, he said.

He also highlighted its struggle to meet international commitments to protect endangered species and biodiversity, which also rely on thriving forests.

“The [deforestation] figures can generally be attributed to weak enforcement mechanisms in the country to curb deforestation and forest degradation,” said Washington Zhakata, climate change director at the Ministry of Lands, Agriculture, Water, Climate and Rural Resettlement.

The problem is undermining Zimbabwe’s desire to meet its international obligations to protect forests and is “a serious national concern,” he added.

Hundreds of small-scale farmers have turned to lucrative tobacco production, cutting down trees to cure the leaves in wood-fired ovens.

Appeals by government and conservationists for tobacco farmers to plant wood lots on their land to protect wild forests have fallen short, as forest timber offers cheaper fuel and policing of its use remains weak, experts said.

“Enforcement [of the law] needs to be upscaled if we are to get anywhere,” Zhakata said.

For carpenters such as Mbuyazwe who have no idea about forest conservation or the source of the wood for their trade, how they will continue working amid shortages remains uncertain.

“It’s just like bread — does anyone ever ask where the wheat to make bread comes from? We know we need timber to work. Where it comes from is another issue altogether,” said the carpenter. Speech