FILE - In this Jan. 19, 2018, file image taken from video, an investigator photographs the where a helicopter crashed near Raton, N.M. A report released this week says investigators found no problems with a helicopter that crashed in New Mexico in January 2018, killing five people including Zimbabwe opposition leader Roy Bennett. The National Transportation Safety Board said the pilot apparently caused the fatal wreck by flying too low over mountainous terrain at night. (Peter Banda, file/Associated Press) 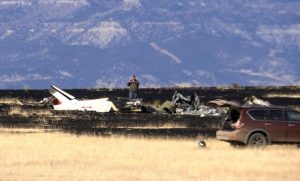