Capital goods are essential for agriculture, whether for tillage, irrigation or threshing. Mechanisation of agriculture is therefore seen as a core aim for agricultural development, and is widely pushed as a route to increasing production and efficiency. 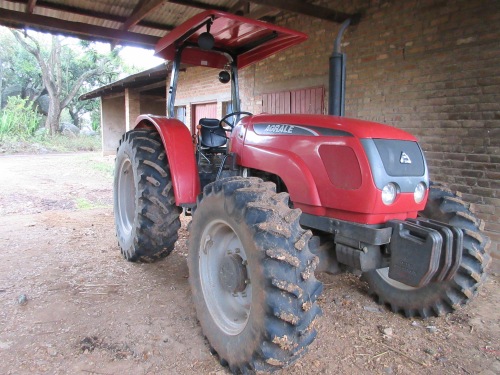 But what scale of technology is appropriate? Where can farmers find the right sort of technology to meet their needs? Does trade in capital goods respond to market demands? Do aid projects help or hinder?

These are the sort of questions we have been puzzling over in Zimbabwe as we’ve been looking at the role of various types of capital goods used in agriculture in land reform areas. Capital goods range from large tractors to small pumps, and these are being used across farms of different sizes, from A1 resettlement farms, with typically under 5 hectares of cultivated land, to much larger A2 medium scale resettlement farms. Size matters, both of the technology but also of land areas and the scale of operation, but so also does capacity, flexibility, maintenance requirements and politics.

Tractors: the symbol of mechanisation

Tractors have always been the symbol of mechanisation in agriculture. From Soviet mass production under Stalin to aid projects across Africa. As a previous blog discussed, the promotion of tractors has a long history in Zimbabwe too. While there was a healthy trade in the large-scale commercial sector, with imports from different parts of the world, the record of tractor projects in the small-scale farming areas was dismal. But land reform from 2000 has changed the dynamic. The large-scale sector is much diminished, replaced by a mix of medium-scale A2 farms and a larger number of smaller A1 farms, where dynamics of ‘accumulation from below’ are evident. This has generated a new demand for tractors.

As part of a wider study on mechanisation and commercial agriculture in Africaunder the APRA programme, new work from Mvurwi area, a high-potential tobacco growing area north of Harare, has shown how tractor use has been expanding. Despite various projects, including the Brazilian More Food International programme, much of this has been based on a private market. Official figures suggest that tractor numbers increased nearly six-fold between 2011 and 2017, mostly in the medium-scale farming areas, and predominantly through a second-hand market of machines originally imported for former large-scale farms. These figures may be an underestimate, however, as survey data show that in the small-scale A1 resettlement areas tractor hiring has increased significantly, as tobacco successful small-scale farmers invest in tractors and hire them out.

The Brazilian tractor cooperatives have contributed to this, but are only a very partial element of a bigger story. Large four-wheel tractors are expensive items and only some are able to buy them, even when old, battered and repaired for a second-hand market. Collective ownership through the Brazilian coops potentially open access to others, but the politics of coops are notorious, and the ones in Mvurwi have become embroiled in turf-wars over control, with coop leaders fending off attempts at political capture by party officials. Tractors of course are always political.,

Tractors in Mvurwi these days are therefore a mix of very old machines imported several decades ago (usually ancient Massey Ferguson and John Deere models), and more recent Chinese models (imported in the flurry of investment under the Reserve Bank of Zimbabwe programmes of the mid-2000s) and a few new Brazilian models (as in the picture above). Perhaps surprisingly, it is the older ones that are the most common and the most likely to continue to function, as there are both the skills to mend them, and a (declining) second-hand spares market. For any mechanisation programme, the ability to repair and reconstruct is essential, and often forgotten in the eagerness to bring in new, shiny machines that support a domestic industry (in China, Brazil, Belarus, India, Iran or wherever) through an aid programme.

The tractor story contrasts with that of small-scale irrigation pumps, which have expanded massively in recent years across the new resettlement areas. As discussed in a recent paper, focused on sites in Masvingo, small, cheap, Chinese-made pumps, together with flexible plastic piping, have transformed the capacity for farmer-led irrigation in a dramatic fashion. This process has largely been ignored by policy-makers and aid agencies alike.

The process is being driven by an agile private market, involving a network of players that link importers with retailers with a growing cottage industry in repairs. Gone are the days when you could only buy a pump set if you were seriously rich or the beneficiary of an NGO project in a ‘group garden’. Costing only US$250, virtually anyone can get one, and start irrigating from rivers, streams, dams and vlei ponds. This has expanded the opportunities to many, including young people without land. The onward links to horticultural markets and processing opportunities in turn all generate employment and local economic growth.

It is both the characteristic of the technology (small, mobile, flexible etc.), but also the market context, that allows small-scale pump irrigation to thrive, and makes the technology ‘appropriate’. Upgrading and scaling up is possible too. Some choose to buy more small pumps to maintain flexibility, while others buy larger, fixed pumps and dig boreholes to expand irrigation.

There are therefore many pathways of innovation and mechanisation. These must suit different people’s social and economic conditions, as access to cash, technology, land and labour is managed together. Appropriate technologies are always socio-technologies, with technical, social and political lives intimately linked.

Mechanisation of agriculture is occurring apace in Zimbabwe, but not as the planners would wish it. The irrigation engineers remain sceptical about the small-scale pump revolution, fixated as they often are with ordered, regularised irrigation schemes with fixed, large-scale pump technologies. Meanwhile, the engineers in the mechanisation departments dream of bigger tractors, with more horsepower and linked to drillers, seeders, combines and the rest, in order to create a vision of commercial agriculture derived from the textbooks. Aid programmes, such as the Brazilian coops, often replicate such visions, as technicians import a perspective from their own context of what ‘tropical technology’ should be, without thinking about need and context.

However, under the noses of the technicians and planners things are happening. These are largely private ‘below-the-radar’ initiatives, linked to locally-embedded markets, and with entrepreneurship not only linked to supplying the kit, but also adapting, maintaining and repairing it. For tractors, the second-hand market is thriving allowing more timely tillage of larger areas, and with small-scale pumps, the cheap, flexible sets have transformed irrigation.

But there are limits. As the stock of tractors, and particularly spares, declines, there are challenges in meeting demand. Hiring businesses, including via cooperatives, are an alternative, and particularly important for small-scale production, where owning a large tractor just for yourself doesn’t make much sense. This is why the connections between A2 and A1 areas is important, and such coordination requires facilitation. For pumps, the semi-disposable pump sets are ideal for starting up, but upgrading is a big step, and borehole drilling remains very costly. Issues of ground and surface water access and management for sustainable use of course become important as pump use expands.

In the wider technological landscape there are gaps too. Two-wheeled tractors, for example, for use on small plots might have an advantage for some, while intermediate level pumps and cheaper drilling options may help upgrading. Investments in linking hiring options through online applications have emerged in some places, while support for training in repairing diverse types of equipment may encourage local businesses. With a better idea of the nature of what ‘appropriate technology’ means a role for coordination and facilitation by state or NGO players emerges, including encouraging south-south trade in capital goods.

Despite the narrative of state-led, directed innovation and mechanisation, agricultural green revolutions rarely happen in this way. Much more common is a flexible bricolage of initiatives that emerge, based on pulling together options that fit. As Steve Biggs and Scott Justice argue for the Asian experience:

“In regions where smaller-scale mechanization has taken place, there has also been a growth of rural industries and strong linkages with the broader national economy. Whether by design or not, it appears that markedly different patterns of smaller-scale rural mechanization over time have led not only to agricultural production increases but also to broad-based rural and economic development…. It is our hope that there will be increasing interest in the “silent and hidden” revolutions of the spread of smaller-scale equipment and that broad-based rural development, such as worthwhile rural employment and careful and intensive use of water and energy sources, will again become important goals of economic development. There is now empirical evidence on a grand scale that shows it can be done”.

This empirical evidence is emerging in Zimbabwe too, and a wider recognition, along with selective coordination and facilitation by state and aid players, is essential if Zimbabwe’s agriculture is to transform in the post-land reform setting.

This post was written by Ian Scoones and first appeared on Zimbabweland.