A Zimbabwean soldier watches shoppers lining up, in Bulawayo on January 17, 2019 as order is slowly restoring. - Nationwide demonstrations erupted on January 14 following a crippling strike over the increase in the price of fuel announced by Zimbabwean President to tackle a shortfall caused by increased demand and "rampant" illegal trading. (Photo by ZINYANGE AUNTONY / AFP) 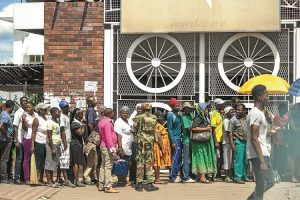