Photo by: Tsvangirayi Mukwazhi A man counts Zimbabwean dollar notes and coins next to a ten US dollar note on the streets of Harare, Tuesday, June 25, 2019. Zimbabwe President Emmerson Mnangagwa on Tuesday praised the re-introduction of the Zimbabwe dollar as the sole legal tender in the troubled country as a "return to normalcy." Zimbabwe had for 10 years used the U.S. dollar and other foreign currencies after the Zimbabwean currency was dogged by hyperinflation. (AP Photo/Tsvangirayi Mukwazhi) 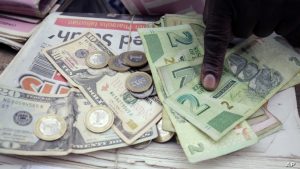