Zimbabwean President Emmerson Mnangagwa shakes hands after addresses a meeting attended by farmers and businessmen from the Zimbabwean White community ahead of this month's elections on July 21, 2018 in Harare. - The seizure of white-owned farms during the era of the former leader Robert Mugabe, triggered hyperinflation across the country with the GDP nearly halving between 2000 and 2008 -- a decline described by the World Bank as the sharpest contraction of its kind in a peacetime economy. The July 30, 2018 vote is the first without Mugabe since the country's independence. (Photo by Wilfred Kajese / AFP) (Photo credit should read WILFRED KAJESE/AFP/Getty Images) 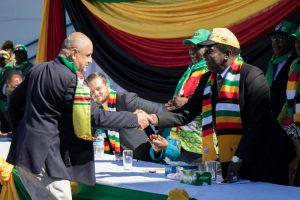