HARARE (Xinhua) — Zimbabwe’s 2019 tobacco output has surpassed last year’s record-breaking output of 252 million kilograms, according to statistics from the Tobacco Industry and Marketing Board (TIMB). This is despite the fact that the crop was grown under drought conditions marked by late rains and prolonged dry spells, particularly when the crop was almost 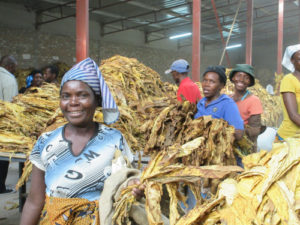 HARARE (Xinhua) — Zimbabwe’s 2019 tobacco output has surpassed last year’s record-breaking output of 252 million kilograms, according to statistics from the Tobacco Industry and Marketing Board (TIMB).

This is despite the fact that the crop was grown under drought conditions marked by late rains and prolonged dry spells, particularly when the crop was almost ready for harvesting.

According to the industry regulator, a total of 252.6 million kg of the golden leaf had been sold as at Aug. 21 since the marketing season opened on March 20, with five days still remaining before the selling season ends.

While the regulator did not show the value of the crop sold to date, the 252.6 million kg sold as at Aug. 21 were valued at 507 million U.S. dollars, compared with 249 million kg worth 730 million dollars that was sold during the same period last year.

Tobacco is Zimbabwe’s main foreign currency earner, with China being the biggest buyer of the crop.

Meanwhile, the TIMB announced Thursday that the 2019 marketing season will end on Aug. 28 while clean-up sales will be conducted on Sept. 10.

“All stakeholders are advised that the 2019 auction floors will remain open until Wednesday 28 August 2019. Deliveries to selling points will be accepted until Tuesday 27 August 2019,” TIMB said in a statement.

TIMB spokesperson Isheunesu Moyo said on Monday this week that they were still receiving tobacco from farmers, with farmers bringing an average of 400,000 kg of the golden leaf to the auction floors every day.

The remarkable rise in Zimbabwe’s tobacco production comes after production plummeted from the previous peak of 231 million kg in 2001 to a new low of 48 million kg at the height of the country’s economic crisis in 2008.

Over the years, production has steadily gone up driven by increased support mainly from the private sector and China, who have contracted growers to produce the crop.