Zimbabwe's Prime Minister Robert Mugabe clenches his fist, in July 1984 in Harare stadium during a meeting. Mugabe, Zimbabwean first Premier (in 1980) and President (in 1987), was born in Kutama in 1924 (formerly Southern Rhodesia). Largely self-educated, he became a teacher. After a short periods in the National Democratic Party and Zimbabwe African People's Union (ZAPU) he co-found, in 1963, the Zimbabwe African National Union (ZANU). After a 10-year detention in Rhodesia (1964-74), he spent five years in Mozambique gathering support in preparation for independence in 1980. (Photo by ALEXANDER JOE / AFP) 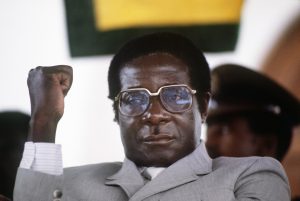