A police outrider leads a hearse transporting the body of former Zimbabwe president Robert Mugabe from the Singapore Casket funeral parlour in Singapore on September 11, 2019, to head to an airport and be flown back to Zimbabwe for burial. - Mugabe, a guerrilla leader who swept to power after Zimbabwe's independence from Britain and went on to rule for 37 years until he was ousted in 2017, died on September 6, aged 95. (Photo by Roslan RAHMAN / AFP) 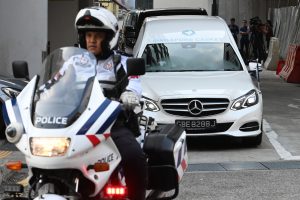