Chief of the South African Army, Lieutenant General Lindile Yam, and Commander of the Zimbabwe National Army (ZNA), Lieutenant General Edzai Absolom Chanyuka Chimonyo, are meeting this week to discuss and discover ways in which the two land forces can work together. 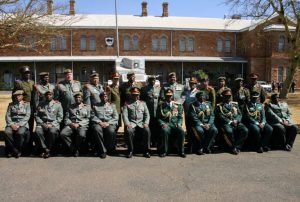 A parade was staged by Yam at the SA Army College on 2 September to formally welcome Chimonyo. The week-long visit is underway to maintain strong military relations between the two armies as well as to deliberate on army-to-army issues of interest in light of the recent appointment of Chimonyo as commander of the ZNA.

“Come my brother, let us sit in a bit of a relaxed environment and let us ponder on how do we respond to the challenges of the two landward forces”, stated Yam in his introductory statement. Yam said that reasons for the visit such as this are firstly, “That the two militaries have an obligation to ensure that they constantly understand their space and interaction” and secondly is that Yam believes that military cooperation means nothing unless it leads to a space for the stabilisation of economic prosperity.

In the wake of cyclone Idai, South Africa has been assisting Zimbabwe in building Bailey bridges over flood-ravaged rivers and according to Yam, there are currently 180 SA soldiers deployed to Zimbabwe for its construction. Yam states, “It was more of an intervention for the floods”, referring to the floods that Cyclone Idai caused on 15 and 16 March 2019.

Border security is a challenge that the two armies have been addressing for a number of years. Chimonyo said that primarily the two countries are doing patrols, having meetings and are strategising. “But you need to appreciate, human beings are very difficult. As much as we do our patrols, you’ll find others escape”. The two chiefs expressed their concern over borders security issues such as illegal immigration and drug trafficking and emphasised that it is not just the border between the two countries they need to be concerned about. “These [border issues] are also coming from the Great Lakes region and Somalia, coming down south” stated Chimonyo. “Actually they are coming from all over the world right now,” added Yam, who went on to say that it is high educated, young Zimbabweans heading south of their border that the Zimbabwean government is now worried about. Chimonyo also added that with Zimbabwe being under sanctions, there is a concern of their people fleeing for South Africa.

In speaking further on mutual cooperation, Yam identified that the sanctions currently on Zimbabwe do pose limitations on the cooperation of the two countries’ land forces. However, developments between Armscor and Zimbabwe are what Yam calls an “urgency”. Yam believes there is an argument to be made for Armscor and Zimbabwe to look into certain engineering aspects as well as co-research capabilities, “which may translate into co-production, but it’s too early [to tell] at this stage.”

In speaking on military training between the two armies, Chimonyo stated that this has been going on since 1994. “That has been going on for a long time but I still believe more can be done by our two countries.”

“The numbers differ every year. It depends on budget that determines how many get sent this side and that side but it is something that must never stop,” stated Yam. Yam went onto to comment on the importance of youth within the two countries militaries being acquainted. “We have realised, as military people and particularly as us, in Zimbabwe, that if you are going to talk of government to government cooperation, you need the junior and young officers to start training together, to be on the same name sake with each other. If you do that, you are doing it for stability for the next 30 years.”

At the conclusion of the media briefing  Yam hosted on Monday, he made a point of thanking the Zimbabwean National Army for the help it gave to South African Army members in the push against insurgence groups in the DRC. “That was a major, major land mission with the possible closure of our consul there. Moving by road, Zimbabwe, Zambia, moving to DRC and back – that is when I really knew that this brotherhood works,” Yam said.