In this photo taken Sept. 13, 2019, Associated Press journalist Andrew Meldrum poses for a photograph at the entrance to State House in the capital Harare, Zimbabwe. After 16 years in journalistic exile, Meldrum returned to Zimbabwe, the country where he worked as a journalist for 23 years until he was expelled by former president Robert Mugabe's government. For the past week he reported on the mourning period for Mugabe. (AP Photo/Ben Curtis) 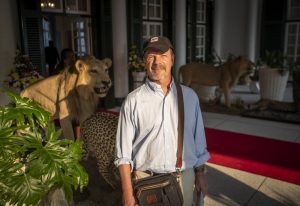