Dr Peter Magombeyi poses as he answers to an AFP interview, in Chitungwiza, 26km south-east of Harare, on September 8, 2019. - For Zimbabwe's doctors, few institutions reflect their country's decay under Robert Mugabe than the once-vaunted public hospitals, now deteriorated, under-equipt and failing. In Zimbabwe, medics say, latex gloves serve as urine bags, operating rooms lack of light bulbs and patients are often forced to refuel their own ambulances. Mugabe, who died last week in Singapore at age 95, may have swept to power as a liberation hero, but his rule was marked by economic collapse that left his people scrambling to survive. Local doctors noted the symbolism of Mugabe seeking treatment 8,000 km from home in Singapore's modern Gleneagles clinic where a private suite can cost more than $1,000 a day. (Photo by Jekesai NJIKIZANA / AFP) 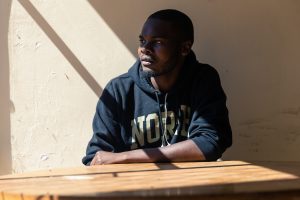