Zimbabweans sit and pray on top of a large rock on the outskirts of Harare, Zimbabwe, Sunday, Sept. 8, 2019. Former president Robert Mugabe, who enjoyed strong backing from Zimbabwe's people after taking over in 1980 but whose support waned following decades of repression, economic mismanagement and allegations of election-rigging, is expected to be buried next Sunday, state media reported. (AP Photo/Themba Hadebe) 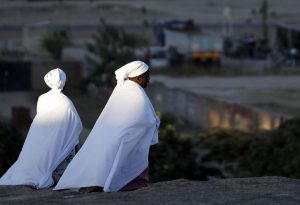