Statement on the Police Attack on Civilians on 20 November 2019 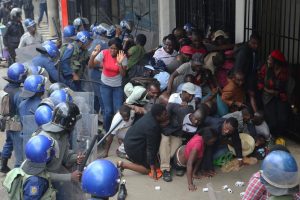 The Zimbabwe Human Rights NGO Forum (the Forum) is disturbed by violent conduct of the Zimbabwe Republic Police (ZRP) officers against civilians and urges the authorities to sanction the officers who attacked civilians in violation of the Constitution of Zimbabwe.

On 20 November 2019, supporters of the opposition Movement for Democratic Change Alliance (MDC-A) gathered at the party headquarters in Harare for the Hope of the Nation Address which was scheduled to be addressed by the party President Nelson Chamisa. The hostile response by the police who indiscriminately beat the crowd with baton sticks, with booted feet and fired tear gas in the busy Central Business District resulted in many citizens involved in their daily business being injured or bundled into police vehicles.

Horrific images and videos were captured by the media showing shocking unprovoked violence by the police. This brutality is unacceptable in any civilised society. It is unfortunate that senior members of the police like Assistant Commissioner Charles Ndoro were recorded by the media at the scene of violence, issuing instructions to the police to perpetrate violence.  This unconstitutional action by the police is deeply regrettable and must be challenged after the events of 20 November 2019.
Members of the Forum who attended to the victims of the attacks have noted that 47 people were assaulted yesterday, including 20 women.  Two children were also assaulted.  8 people were illegally detained including a 10-month-old baby and the mother.  Of the 8 people arrested, 7 are still incarcerated at the time of report compilation.

The conduct of the police is deplorable and is contrary to the rhetoric of the Government of Zimbabwe on promoting and protecting human rights. (Section 44 of the Constitution of Zimbabwe obliges the State and every person, including juristic persons, and every institution and agency of the government at every level to respect, protect, promote and fulfil the rights and freedoms set out in the Constitution.

The Constitution of Zimbabwe is clear in section 58 that every person has the right to freedom of assembly and association. Section 59 gives the right to demonstrate and this must be exercised peacefully.

Recently, the Government of Zimbabwe presented to the United Nations and the African Commission on Human and Peoples’ Rights that its police officers have gone through human rights training.  Clearly, the conduct of the police, in this case, did not reflect a police service that is human rights conscious and has undergone any training.  While the Forum acknowledges that the State has an obligation to maintain public order to prevent social disruption, damage to property, injury and loss of life, a clear set of international human rights law standards has been developed in respect to the use of force by law enforcement officials. From the reports received and eye-witness statements, the crowd gathered at Morgan Tsvangirai House was not violent in any way and the documented conduct of the police was disproportionate to the threat paused by the crowd. The indiscriminate beating of passers-by, women and children who were in no way linked to the demonstration was criminal and must be investigated.

What this incident tells us is that as a nation we have learnt nothing from the past and are not willing to undertake the reforms necessary to build a peaceful society.  Recently, the government reported to the African Commission of their intention to implement the recommendation of the Montlanthe Commission. The behaviour of the police shows lack of sincerity in such statements.  The Motlanthe Commission in its report after the August 1, 2018 post-election crackdown by the Zimbabwe National Army made recommendation for the law enforcement agents to be capacitated to handle protests in a way that does not see a recurrence of the August 1 killings and assaults where 6 innocent civilians were killed
The government has always denied reports by the Forum of human rights violations. It gives us no pleasure to report that the events of 20 November 2019 vindicate all our reports released in 2019 including the most recent 2018 State of Human Rights Report, the 2019 Anti-Impunity Report, the New Deception and the special report – Hear Their Cry – A Report on State Violence Against Children During the 2019 January Protests.

It is also regrettable that the behaviour by the police shows utter disrespect of the recommendations of the United Nations.  The United Nations Special Rapporteur on Freedom of Peaceful Assembly and Association, Clément Voule who was in the country in September expressed concern in his preliminary findings on 27 September 2019 over the reports of excessive, disproportionate and lethal use of force against protestors, the indiscriminate use of teargas, batons and live ammunition in Zimbabwe. The Special Rapporteur recommended that law enforcement agents must desist from broad discretion to disperse public gatherings and to follow guidelines of the United Nations Basic Guidelines on the Use of Force in promotion of the right to freedom of peaceful assembly.

The Forum calls for adherence to human rights as the pact is clear in section 44 of the Constitution that government must respect, protect promote and fulfil human rights.

The Forum calls on the Government to do the following,

The Forum also calls on the following;