NESIGWE, Zimbabwe (Thomson Reuters Foundation) - Livestock farmer Siphiwe Moyo walks briskly under the scorching sun until she arrives at a shady tree in the middle of a parched, unplanted maize field. 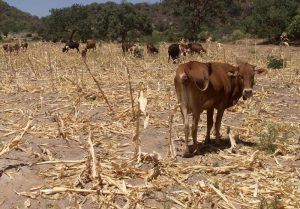 She is making a second check on three emaciated cows, two of which are pregnant.

Moyo, 59, is relieved to see them still standing. She and her husband, Daniel sometimes have to lift the weakened animals back to their feet three times a day in a frantic bid to keep them alive.

As another drought ravages Zimbabwe, farmers in livestock-rich Matabeleland, in the country’s west, are again counting their losses as animals die from thirst and lack of food.

Zimbabwean farmers, hit by more frequent droughts as climate change takes hold, have made efforts to change livestock practices to better cope with dry times – but not all of the new adaptation strategies are holding up, they say.

As a result, in a region where livestock is a store of wealth for most families, drought is again drying up income and reducing savings, farmers say.

“The cattle are our bank,” Siphiwe Moyo told the Thomson Reuters Foundation, as her cows – two of them pregnant – stood in the shade.

If the cows die, “we will lose five animals in one go”, she said.

In September and October, Matabeleland North reported losses of nearly 2,600 cattle as drought dried water supplies and pastures, said Polex Moyo, an officer for the province’s department of veterinary services.

He believes the losses will be even higher, with many livestock “in very poor condition”, he said.

A year ago, by comparison, 766 cattle were lost over the same period, he said.

Cattle are dying in part because cash-strapped farmers can’t afford to buy the supplementary feed their animals need, particularly with the price surging as demand soars, said Kenneth Nyoni, a trader in agricultural inputs.

A 50-kilo (110 lb) bag of commercial cattle feed is now selling for a third more than a year ago, he said.

Daniel Moyo said his family has already sold three goats to buy cattle feed in an effort to keep the three emaciated cows alive, and he expects to sell more goats.

But the struggling cows also are eating some of the family’s own maize meal – a staple food – mixed with salt and maize stalks saved from a 2017 harvest, he said.

“We have never lost animals to drought before because the situation was never this bad,” he said. Another 20 cattle the family owns “are at risk too unless we get rains soon and they have water and grass”, Moyo said.

Moyo’s neighbours in other villages in Nkayi District are already seeing their animals die.

In Tshutshu, village head Mbulawa Sibanda says he has seen 15 cattle lost to drought in the last few weeks.

The bush is filling with rotting animals, and more will die even if rains come, he said, as pastures take time to recover.

Ngwiza Khumalo, the headman of nearby Mhlabuyatshisa village said his community had lost 18 cattle in the last three weeks.

The deaths come as most rivers in the district have dried up and livestock need to travel ever-longer distances in search of water, Moyo said.

Farmers started reducing their herds as the drought-hit, he said, but many took action too late.

A project in Nesigwe village, to put cattle into feeding pens during droughts – a move that cut losses in a previous drought – also has struggled in recent years, said Moyo, who chairs the effort.

When the project was first established in 2015, farmers fed animals in the pens with commercial feed, with the cost offset by the much higher price the fat cattle brought at the market in a year when supplies of them were low.

The cash earned from sales then helped feed other animals, keeping more of them alive.

But a devaluation of Zimbabwe’s currency in late 2016 led to the collapse of the project, as the currency farmers brought in from cattle sales couldn’t buy enough feed to keep other animals alive, said Muhle Masuku, a farmer who helped launch the project.

In September, the International Monetary Fund warned that Zimbabwe’s economy was likely to shrink in 2019 as inflation soared to 300%, the highest rate in the world after Venezuela.

A shortage of foreign currency, water and electricity, combined with rising inflation, have sent the costs of goods and services surging in the country, which declared a drought disaster in August.

Reason Ndebele, a farmer in the village of Mtshengiswa, said saving cattle during drought often required hard work as well as cash.

He has hand-dug a well deep into the dry bed of the Tshangani River to provide water for his 25 cattle and pulls up 30 20-litre buckets of water each day for them.

He sold some animals to pay for supplementary feed for the rest – something not everyone is willing to do, he said.

“Many farmers are not even keen to sell one animal to buy livestock feed and save 20 animals,” he said.

Farmers – many of whom grow crops as well as raise cattle – also are struggling to afford quality seeds and fertiliser this year, local officials said.

“While farmers are losing cattle in Nkayi, many families are also going for days without food and cannot afford to buy inputs to prepare for farming this year,” said Kufakwezwe Ncube, a councillor in Nkayi Urban Ward 29 and former chairman of the Nkayi Rural District Council.

He called for urgent government help to supply food aid.