HARARE (Reuters) - When Dominic Benhura started creating traditional Zimbabwean stone sculptures as a teenager four decades ago, he never imagined that art would bring him fame or fortune. 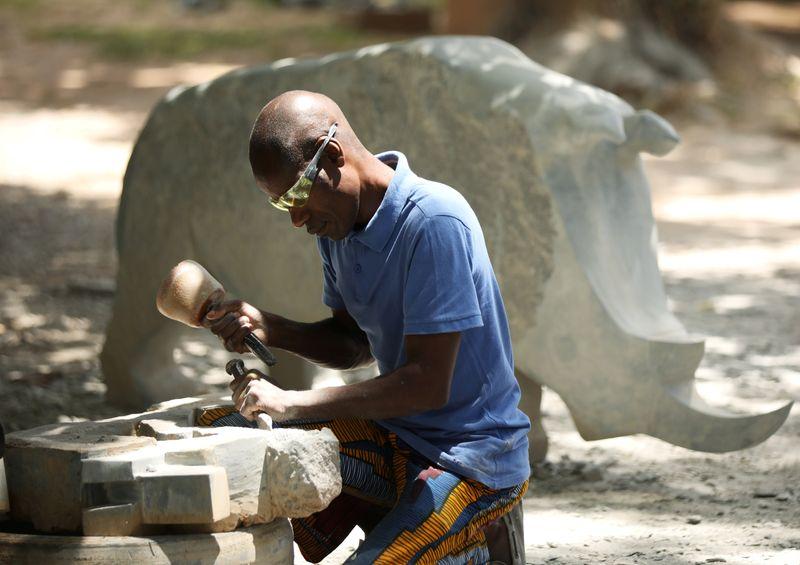 Born to a peasant family in 1968 in Murewa, 90 kilometers northeast of Harare, Benhura is now a globally acclaimed artist and a leading proponent of the style.

They explore traditional African themes such as motherhood in both realist and abstract forms which periodically catch the eyes of curators in far flung Western capitals.

The art form traces its lineage to the medieval empire of Great Zimbabwe, founded in the 11th century, whose most renowned artefact is a fish eagle hewn from soapstone.

A Shona sculpture exhibition has been running for the past month at ValleyArts a New Jersey, USA, arts center. Shona sculpture is also on display at New York’s Museum of Modern Art, Chicago’s Field Museum of Natural History, Indianapolis Museum of Art as well as the British Museum.

Benhura learnt the art from other sculptors, including his cousin, after moving to the capital Harare in 1979, the year before Zimbabwe won independence from Britain.

“I was so fascinated by people creating something out of stone, so I asked them if I could help them polishing and finishing their work,” he told Reuters at his workshop.

Eventually, Benhura found his own niche. His forerunners’ work was mostly static, he says, so he created forms in motion.

“My art celebrates life and I am inspired by my day-to-day life. I do animals, I do plants, I do birds, but I’m more inclined towards women and children,” he says, explaining this was because he was brought up by his mother and aunt after his father died shortly before he was born.

Benhura’s work propelled him out of poverty and early family tragedy to a life he describes as blessed. At 23, he bought his first house in one of Harare’s townships. He now lives and works at his gallery in one of the capital’s more affluent suburbs.

He also has permanent exhibitions in Atlanta, Colorado, Victoria Museum in Melbourne, Australia, and in Siena, Italy.

“As much as Zimbabwe is renowned for this stone sculpture …. we do not have many pieces in museums because in Africa we don’t have (enough of) our own museums,” Benhura laments.

“I wish we’d have more so that our work is also retained in Africa for our future generations.”