The Crisis in Zimbabwe Coalition (CiZC) is shocked by the government of Zimbabwe’s claims that it fully complied with recommendations of the Motlanthe Commission of inquiry into August 1, 2018 events during which the army killed six civilians with 35 others injured. 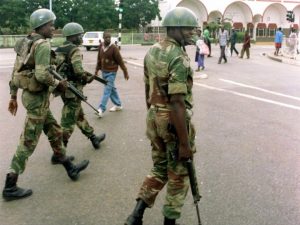 As a Coalition, we view such an announcement, without any evidence backing it, as a refusal by the government to be accountable for human rights violations and lack of respect to the unfortunate lives lost, a situation that has hindered previous efforts on National Healing and Reconciliation.

It is evident that none of those responsible for the killings has been brought to book and convicted.

Further to that, members of the Army and Police who were in breach of their professional duties and discipline are yet to be identified for their internal investigations and appropriate sanction as again recommended by the Commission.

If in any case, the Commission recommendations had been implemented, then some of the killings, beatings and human rights violations perpetrated during the lockdown might have been prevented.

It is important to underline that there has not been any meaningful or sincere effort towards reform and transformation from the government of Zimbabwe except mere politicking.

National Healing and Reconciliation also recommended by the Motlanthe Commission continues to be a pipe dream in Zimbabwe owing to lack of sincerity on the part of authorities and this explains why results of the Commission that investigated the Gukurahundi Massacres which claimed more than 20 000 lives remains a top-secret up to now. Victims of these massacres, their relatives, stakeholders and the nation at large have waited for justice in vain for more than three decades.

As a Coalition, we have always maintained that the Motlanthe Commission was set up with an interest to absolve President Emmerson Mnangagwa, ZANU PF and the Zimbabwe National Army from the killings of civilians who were demonstrating against electoral fraud.

We reiterate that, those involved in the killings should be brought to book and that the government should fully compensate all victims of August 1, 2018 army shootings.

We recommend that the government should set up an all-inclusive National Dialogue platform and an all stakeholders healing and reconciliation platform for the country to move forward.