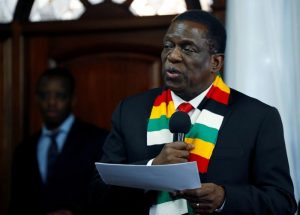 Zimbabwe’s currency has collapsed against the US dollar and inflation has risen to a catastrophic 785 percent. The already desperate economic situation, exacerbated by the COVID-19 lockdown, is fuelling mounting opposition and social unrest.

The country has so far recorded 2,124 coronavirus cases and 28 deaths, with the epicentre of the coronavirus currently at Bulawayo with 593 cases followed by Harare (579) and Matabeleland South (338).

In June, the Joint Operations Command (JOC) that includes officials from the military, police and secret service and is the highest body coordinating state security, sidestepped the ZANU-PF government of President Emmerson Mnangagwa. One of long-time ruler Robert Mugabe’s closest political associates, Mnangagwa succeeded him in 2017 after he led a military coup. Hailed as a reformer, the euphoria soon disappeared.

The security chiefs ordered the closure of the country’s stock exchange, saying it was being used to sabotage the economy. In an unprecedented development following rumours of a coup plot, several generals were forced to call a press conference to say they were not plotting Mnangagwa’s overthrow.

The JOC terminated Old Mutual’s listing on the stock exchange, the biggest insurer and largest company by market value that helps “determine the future cost of goods and services” in the country. It also shut down Ecocash, a mobile money service, claiming that it was being used for money laundering and black-market activities that caused cash shortages hitting the poor and most vulnerable hardest. Ecocash is used by millions of Zimbabweans to pay for their daily transactions.

The price of food and basic commodities has skyrocketed. Food and medical equipment shortages are widespread. Rising transport costs have forced people, including health care workers, to walk to work. The monthly pay of nurses and teachers—now worth just $30—has evaporated, as the Zimbabwe dollar has plunged to just one cent of the US dollar.

Zimbabwe currently requires at least US$300 million to feed 8 million people, around 60 percent of the population, in danger of starving, an increase of 3 million from last year. Drought has slashed food production in what was once the continent’s breadbasket, as climate change makes disasters like last year’s Cyclone Idai more common. Zimbabwe is now one of the most food insecure places on the planet along with South Sudan, Yemen, and Somalia.

Last year’s maize harvest in Zimbabwe was down 50 percent on 2018, with overall cereal output less than half the national requirement. By August of 2019, the World Food Programme (WFP) was forced to launch an emergency lean season assistance programme to meet rising needs, months earlier than anticipated.

Niels Balzer, the WFP’s Deputy Country Director in Zimbabwe, said that the WFP planned to double the 4.1 million it was assisting, saying, “Firm pledges are urgently needed as it can take up to three months for funding commitments to become food on people’s tables.”

The economy is set to contract between 4.5 percent and 10 percent, far above the continent average of 3.2 percent for Sub-Saharan Africa predicted by the IMF.

The government has slashed public spending, even as it hands out sweeteners in the form of luxury vehicles for senior officials to shore up its base of support, in a bid to reduce the budget deficit to 1.5 percent of GDP.

According to Bloomberg , the government has agreed to pay $3.5 billion in compensation to white commercial farmers evicted from their land two decades ago, in a bid to find some rapprochement with the imperialist powers, after making promises to China in 2018 of a more liberal investment and trade policy. Finance Minister Mtuli Ncube’s most recent request to the International Monetary Fund (IMF) and World Bank for aid to deal with the country’s economic and health care catastrophe was again rejected.

Mnangagwa, aware of the mounting unrest and social opposition, instructed finance minister Mtuli Ncube to arm riot police with water cannons and all-terrain troop carriers. The government has reimposed a dusk-till-dawn curfew that will limit the number of hours business can open, restrict movement between cities and heavily increase the presence of military and police on the streets.

The government is also exploiting the recent surge in coronavirus cases to crack down on mounting opposition, arresting Hopewell Chin’ono, a prominent journalist known for his reporting on the country’s rampant corruption. Another arrested was Jacob Ngarivhume, the leader of the small opposition party, Transform Zimbabwe. They are charged with “incitement to participate in public violence,” presumed to be linked to a protest against corruption to be held on July 31.Their arrests follow a series of detentions of government critics over the last few months, with many being assaulted, humiliated or threatened by usually unidentified men and told not to criticise the government.

The security forces have arrested striking nurses for protesting poverty wages, appalling work conditions and the lack of personal protective equipment (PPE), charging them with contravening COVID-19 national lockdown regulations. Despite this intimidation, at least 15,000 nurses have continued their strike. They have been on strike for more than a month, with only student nurses and those on probation reporting for work at hospitals. Other health workers, have reportedly taken leave days, forcing some hospitals to close casualty departments that had remained operational.

Doctors are also set to join the strike. The Zimbabwe Senior Hospital Doctors Association said, “We are finding it difficult to continue offering services in our workstations because of a number of challenges … for which no solution has been proffered.” They are demanding their wages be paid in US dollars.

Nurses and doctors have borne the brunt of the coronavirus pandemic. At least 200 medical workers have tested positive for COVID-19, forcing hospitals to close. In Midlands province, 25 nurses at Zvishavane Provincial Hospital tested positive, while three nurses at Claybank Private Hospital in Gweru tested positive. In Bulawayo, 70 nurses tested positive, including 51 student nurses, employed by the government in an attempt to break the strike.

Nurses have abandoned United Bulawayo Hospitals and Mpilo Central Hospital as the government’s failure to provide adequate PPE and cleaning have turned them into death traps. At Mpilo, 197 staff members were forced into quarantine and 12 nurses tested positive. At United Bulawayo Hospitals, 42 nurses and 26 student nurses were forced into quarantine after a 79-year-old woman died of the coronavirus.

Prisons have become the latest hotspot for the spread of the virus, with 43 inmates and 23 prison officers testing positive at Bulawayo Prison. Superintendent Meya Khanyezi told the Chronicle, “Like the national statistics, cases keep rising and we are doing our level best to contain the situation in all our prisons.” She appealed for donations to help inmates sanitise and wash their clothes.

The reopening of schools, set for July 28, has been pushed back. Universities and colleges have also been ordered closed, with face-to-face lectures suspended and classes restricted to online learning. Higher and Tertiary Education Permanent Secretary Professor Fanuel Tagwira said the decision was made after a lecturer at Chinhoyi University of Technology tested positive for COVID-19.

The opposition and pro-imperialist Movement for Democratic Change Alliance, along with the trade unions, is trying to corral the growing opposition to Mnangagwa behind it, organising mass protests for July 31.