Today is World Hunger Day. With all eyes fixed on Covid-19, another devastating pandemic has been brewing: southern Africa is in the vortex of a hunger and food insecurity crisis of record proportions, owing to a lethal combination of natural and man-made factors with the added impact of the virus. 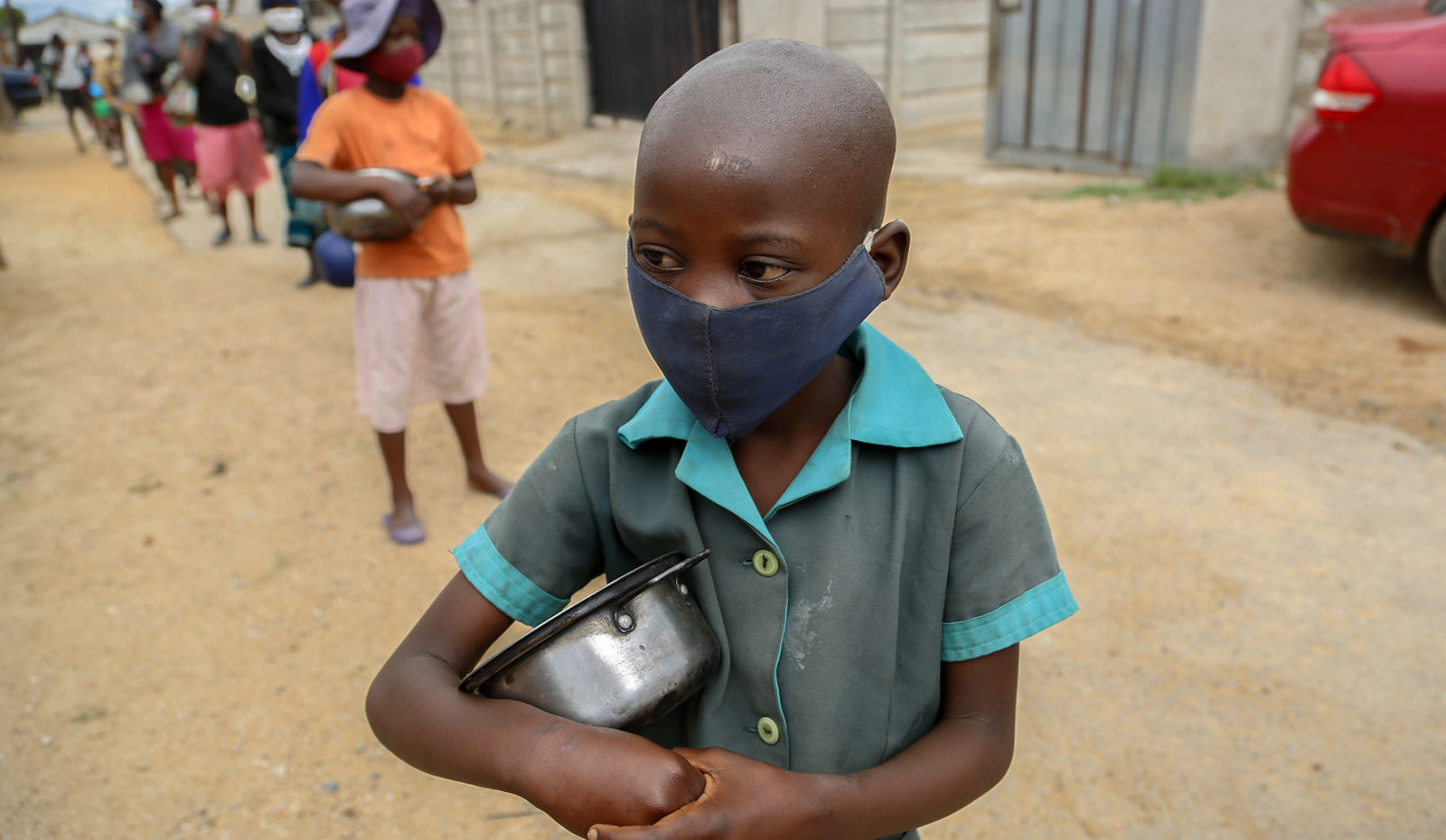 A girl holds a container as she waits to receive porridge at Kuchengetana kitchen in Chitungwiza, Zimbabwe, 03 December 2020. 35-year-old Samantha Murozoki has been feeding thousands of people for the past 230 days. She has drawn public support for her works at a time families are struggling to put food on the table due to the Covid-19 pandemic. Murozoki, an immigration lawyer founded Kuchengetana Trust to help children with porridge every morning and adults with supper daily. Over 2000 children and adults benefit from her kitchen which is situated at her home in Chitungwiza, 30 km south of the capital Harare. (Photo: EPA-EFE/AARON UFUMELI)  Less

Today is World Hunger Day. With all eyes fixed on Covid-19, another devastating pandemic has been brewing: southern Africa is in the vortex of a hunger and food insecurity crisis of record proportions, owing to a lethal combination of natural and man-made factors with the added impact of the virus.

More than 100 million people in Africa are facing catastrophic levels of food insecurity, a situation that may worsen in the coming months.

In a report issued on 23 March 2021, the Food and Agriculture Organization of the United Nations (FAO) and the World Food Programme (WFP) warned of an unprecedented food security crisis in more than 20 countries across the globe.

According to the Hunger Hotspots report, the majority of the affected countries are in Africa.

In southern Africa, a region with a high proportion of workers in the informal economy, the most vulnerable have been hit hard. More specifically in parts of Angola, the Democratic Republic of Congo (DRC), Madagascar, Mozambique and Zimbabwe, some people are experiencing a critical hunger situation, with extreme depletion of livelihoods, insufficient food consumption and high acute malnutrition.

While Covid-19 has resulted in devastating effects on global hunger and poverty – particularly affecting the poorest and most vulnerable populations – chronic and acute hunger were on the rise due to various factors including conflict, socioeconomic conditions, natural hazards, climate change and pests. By the end of 2020, more than 155 million people were suffering from acute hunger due to conflict and instability.

Recently released data on food security conditions from the Famine Early Warning Systems Network provide insight into the unprecedented scale and level of the current food security crisis, indicating that crisis conditions are at their highest level since 2010, when extensive drought and famine affected the Horn of Africa.

“We are seeing a catastrophe unfold before our very eyes. Famine – driven by conflict and fuelled by climate shocks and the Covid-19 hunger pandemic – is knocking on the door for millions of families,” said WFP executive director David Beasley.

One severely affected country is the DRC, where more than 15 million people are experiencing acute food insecurity, with a projected 19.6 million likely to face high acute food insecurity, including 4.9 million struggling to survive “emergency levels”, between January and June 2021. Such staggering figures reflect a combination of multiple shocks, including violence, natural disasters, epidemics, economic decline and the socioeconomic impact of Covid-19.

Protracted conflict remains a leading driver of food insecurity, most notably in the eastern provinces of North Kivu, South Kivu and Ituri. The intensification of violence in these areas in 2020 led to livelihood disruptions, access constraints and an estimated 5.2 million people being internally displaced.

Cholera and malaria are also widespread and there have been further outbreaks of Ebola.

Angola is struggling with its worst drought in at least four decades. Another dry cropping season in 2021 is likely to push families in the southwestern provinces into extreme vulnerability, increased food insecurity and livelihood losses, worsened by the current economic downturn and an outbreak of the African migratory locusts.

The WFP has warned of an impending hunger crisis, including chronic food insecurity and malnutrition in the worst-affected areas. As water supplies continue to dwindle, up to 40% of crops have been lost and livestock are at risk.

Tightening credit conditions and overall reduced business activity as a result of Covid-19 have also worsened the situation.

According to the Hunger Hotspots report, an estimated one million people in Angola will suffer food insecurity in 2021, 17% above the five-year average. Given that people have been struggling to cope with multiple shocks since 2016, the total population in need of help could rise sharply in the coming months.

A number of crises, including recurrent climate shocks in the form of drought and floods, conflict and violence and the impact of Covid-19, are disrupting livelihoods across Mozambique and increasing food insecurity in the country.

The situation is particularly concerning in the conflict-affected areas of Cabo Delgado, as well as Inhambane, Gaza, northern Maputo and southern Manica provinces.

In the northern region, conflict and erratic weather have disrupted communities’ agricultural activities and livelihoods. By the end of 2020, nearly 840,000 people in Cabo Delgado, Niassa and Nampula were facing crisis or emergency levels of food insecurity (IPC Phase 3 and 4), while disruption of markets due to insecurity has driven up the cost of food and household items.

Across the country, at least 2.7 million people were facing severe hunger by the end of the year, the majority of them (1.9 million) in rural areas.

Hunger in Madagascar at a 40-year high

Madagascar is experiencing its worst hunger crisis in 40 years, brought on by droughts and sandstorms that have turned many fields infertile. WFP says about 1.35 million people are food insecure in southern Madagascar, nearly double what it was in the same period in 2020. Severe malnutrition rates continue to spiral.

The situation is so dire that locusts – which are ordinarily considered a crop pest – have become a source of survival for many. According to the Famine Early Warning Systems Network, most poor families have to rely on foraging for wild foods and leaves that are difficult to eat and can be dangerous for children and pregnant women. Aid agencies have reported people eating termites and mixing clay with tamarind.

The WFP has called on the international community to send urgent help to Madagascar and says acute malnutrition in children under five has almost doubled over the past four months in most districts in the south. Ambovombe has the highest rates.

Zimbabwe continues to suffer from a complex food security crisis, driven by weather shocks and persistent macroeconomic instability that is worsened by the effects of the Covid-19 pandemic.

Rampant food inflation remains a key driver of acute food insecurity. Despite a slowdown in monthly price increases since mid-2020, and a stabilisation of the official exchange rate, food prices in February 2021 were still 35% higher than the previous year.

The pandemic has increased hunger and food insecurity in Zimbabwe, which was already struggling with a poor economy before it began.

The WFP says the problem is especially acute for unemployed urban dwellers. About 2.4 million in the country’s urban areas are struggling to meet their basic food needs owing to the Covid-19 restrictive measures.

The WFP also scaled up the 2020/21 Lean Season Assistance to reach 1.5 million rural people in 29 districts in April with humanitarian food aid.

Although most Covid-19 restrictions have been lifted, the Famine Early Warning Systems Network argues that the residual effects of the measures and the larger global economic slowdown continue to affect income-earning opportunities for poor households who predominantly rely on the informal sector. A high proportion of informal activities such as cross-border trade, petty trade, remittances and small-scale industries are ongoing, though at below-normal levels, especially as land borders remain closed.

In early April, the International Organization for Migration (IOM) reported more than 200,000 returnees from mainly South Africa and Botswana due to job losses and deportations since March 2020. These populations are likely putting further pressure on already weak labour markets in areas where they return.

Years of successive drought have also left Zimbabwe vulnerable to food insecurity. At the beginning of 2021, the WFP predicted that at least 7.7 million people out of the 15 million population would require food aid in the first half of the year.

The hunger and food crisis engulfing southern Africa is dire. The Covid-19 pandemic has only made an already bad situation worse and difficult to manage. Once again, the region will require food aid to feed itself and sustain life.

Much of the food insecurity situation stems from systemic economic conditions as well as long-standing and recent conflict. Natural disasters deepen the crisis. However, the lack of any sustainable mechanisms to mitigate the impact of food insecurity and hunger makes the region vulnerable almost annually as any shock opens the floodgates that leave more people food insecure. DM/MC

The Southern Africa Human Rights Roundup is a weekly column aimed at highlighting important human rights news in southern Africa. It integrates efforts of human rights defenders and facilitates evidence-based engagement with key stakeholders and institutions on the human rights situation across the region.

The weekly roundup is a collaboration between the SAHRDN and Maverick Citizen.